Me & My Life, Photography, Science

I’ve seen time-lapses from Iceland. I’ve seen videos from space of the colours around the Arctic. I’ve even seen photos of the Aurora Borealis from St Andrews, where I live. I’ve really wanted to see them myself.

My first reaction, honestly, was dismissal. I didn’t know Ed as someone familiar with astronomy, and I’m well aware of how a little wishful thinking can turn aeroplanes or planets into UFOs, and light pollution or high clouds into astronomical events.

I felt this way because it was late, and it was the end of a very tiring day. I was about to go to bed. The harbour is a 15 minute walk from where I live, and even if I could’ve mustered the energy for the walk, I would surely have arrived too late.

But I didn’t dismiss the idea outright. The next time I went to the kitchen, I took a peek outside the back door. Immediately I was struck by the scene in the sky. What I saw was weird. Weird, confusing, and amazing: 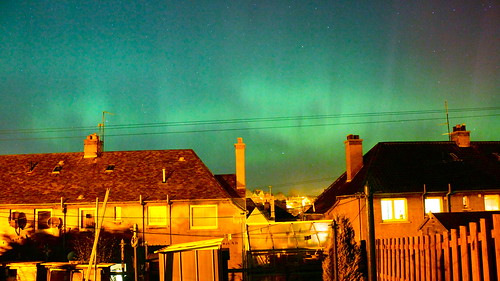 Despite being in the centre of a residential area, full of light, with the sky partially obscured by buildings, what I saw when I looked to the north was something that is hard for me to write down precisely. It certainly didn’t appear as it does in the photos above and below – those are several-second exposures from my camera, with the saturation and contrast increased dramatically afterwards. At higher latitudes, perhaps the intensity is enough to make the eye see as the camera. But on this night in St Andrews, it didn’t.

But it was still very impressive. To my eyes, the green patches were not as vivid as in the photos, or as extensive, but they definitely had a green hue to them, and they had a luminosity unlike the rest of the sky. Something was there, and that something was moving. Not moving like a cloud through the sky. I would look at one patch of light, try to focus my eyes on it, and then turn my gaze elsewhere. But when I looked back at the previous section, the patch would be different, or gone. The lights went through constant but subtle motion.

Within several minutes the intensity had decreased to the point where the colours were only visible on my camera. Yet I stood outside for as long as I could, about half an hour, taking photos and gazing at the sky, completely absorbed in my first experience of this display. 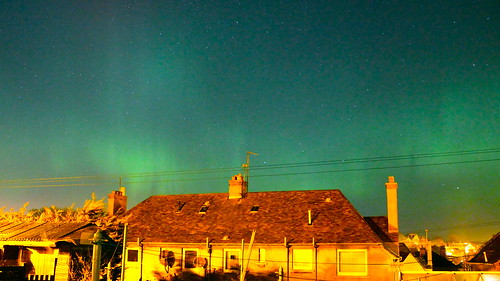