Me & My Life, Photography, Science 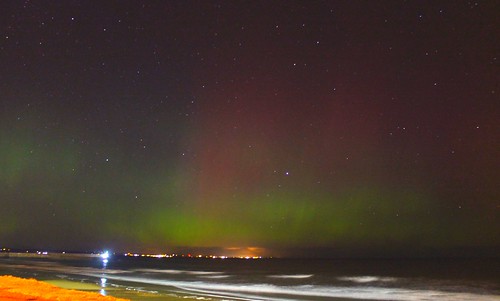 Since my last post, I’ve been lucky enough to twice see the northern lights. Both times have been in 2016: once in the first hour of the year, and then again in early March.

The northern lights at New Year were faint, yet still impressive. As I do every year, I spent Christmas with my family, but afterwards I returned north to celebrate my first New Year in St Andrews. On New Year’s Eve I made gnocchi (thanks for teaching me, Betta!) then headed to East Sands for a bonfire. My fuel was damp, but after an hour of producing thick smoke, the wood had dried, and it burned bright and warmly for the rest of the evening. The night sky was clear, and the air crisp.

It was too dark to read my watch, and my phone had died at around 10, yet the stroke of midnight was nevertheless unmissable. In an instant, the Angus coastline erupted with firework displays, 20 or 25 of them, sparkling along my northern horizon to the sound of rockets and mortars exploding behind me in St Andrews. It was truly a delightful ten minutes for me: although entirely predictable with a moment’s thought, it was not something which I expected, and I was thrilled.

As the fireworks died down, and my bonfire began to wane, my eyes wandered to the stars, and I spotted the unmistakable glow of the Aurora. Green, faint, indistinct, and slowly moving – but still magical. With no way of capturing a photo, I simply watched the show by my fire, as many have done before me.

I didn’t see the Aurora again – knowingly, at least – until 6th March. At around 8pm on that Sunday evening, my housemate Dan was walking along the Fife coastal path into town. He texted me: were the northern lights out? Although I had seen no aurora warning email, and I could see nothing posted to social media, I quickly wrapped up warm and headed to a bench on the coastal path, just outside my house. I quickly confirmed: yes, they were out.

Again they were faint, but nevertheless I quickly spread the word: first to my friend Tanvi, who I knew was nearby, and then to others, including via my Facebook status. Soon I was joined on the bench by a few of my friends. They were pleased to be able to see the northern lights, but it didn’t seem like something to stick around for. Yet within minutes, the display had massively intensified, and we were amazed. No one was heading off. What had before been only a vague green blob was now a dynamic and bright and detailed display encompassing the entire northern sky. Just as in those photos and time-lapse videos which I’ve seen and always slightly doubted, there were bands of light, moving visibly to the eye, with distinct sharp edges and zones of different intensity. There were different colours, red and greens, along with occasional streaks of light shooting towards to zenith, and blobs of intensity descending toward the horizon. We watched intently – freezing, but awestruck. 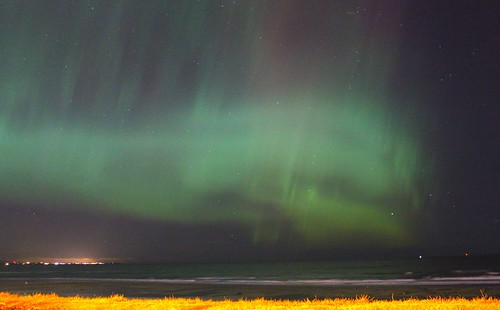 Aurora in full force at East Sands in St Andrews, 6th March 2016. Looks like a snake/rabbit.

The intensity died down after 10 or 15 minutes and returned to its original state, only to recur an hour later when I was back inside cooking some salmon (I could no longer ignore my hunger!) but which I managed to see from my bedroom window. ((At this point I think I unintentionally let a starling into my house, but that’s a story for another time.))

What was especially remarkable, to my mind, was the number of people who came out to see the show. When I first went outside I was the only one around, yet within 15 minutes word had spread widely, and the beach and coastal were busy with people. I was undoubtedly one of only many to share the news online, but it was a real demonstration of the power of our inter-connectedness. Within minutes, word had been received by hundreds of people. Ten years ago, the message would have reached far fewer, and reached them far slower.

Computing technology surely has some negative societal effects, but this is not one of them. 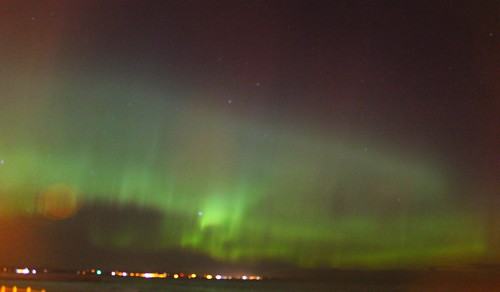 The northern lights from my window in St Andrews, 6th March 2016. (Unfocused, sorry)