Blogging, Me & My Life, Pictures

I’ve hardly written anything recently. I’ve not written on my blog for about 4 months, during which time…

All perfect topics to write about, yet not once did I bother. If I’m ever going to get back into the rhythm of this (which I probably won’t), I’ll have to start small. How small? This small:

Yesterday I went on a bike ride.

I brought my bike back from St Andrews a week or two ago. I keep it in the shed at Albany Park during term time, and as I was staying in St Andrews for a large part of the summer, I left it there when I moved out. The weather has been so wet this summer that I didn’t use my bike at all in St Andrews, and I brought it home in the hope that the weather would finally improve and I’d be able to go on at least some rides.

The weather hasn’t improved, but my courage has. Anticipating this, I spent an afternoon a few days ago cleaning and maintaining my bike in the garden. I still need new brake blocks and (probably professional) repairs to my front gear mechanism, but otherwise I’ve got it running nicely. I’ve even got a new helmet, which Jonathan left me when he moved out of Albany Park. It’s good, much better than my old one, and it fits snugly and comfortably. AND SAFELY.

The weather seemed fairly bright and dry after breakfast yesterday. I put on some suitably scruffy cyclewear (including waterproof jacket and cycling gloves) and then made a prawn mayonnaise sandwich for my lunch, which I threw into my backpack along with a water bottle, a can of Orangina, my Kindle, and – yup – an umbrella.

I haven’t cycled much around Perth, but I’ve done enough to have a couple of favourite routes. I enjoy cycling into the Earn valley, which is where I went yesterday. The Earn valley lies just to the south of Perth, and stretches to the west in the direction of Auchterarder. To get there, you follow the old Edinburgh Road out of Perth and into Bridge of Earn, and from there you go wherever you fancy. I usually head west about as far as Forteviot before crossing to the other side of the valley and heading back to Perth, and that’s pretty much what I did.

Here’s the route that I took (click to see a better version): 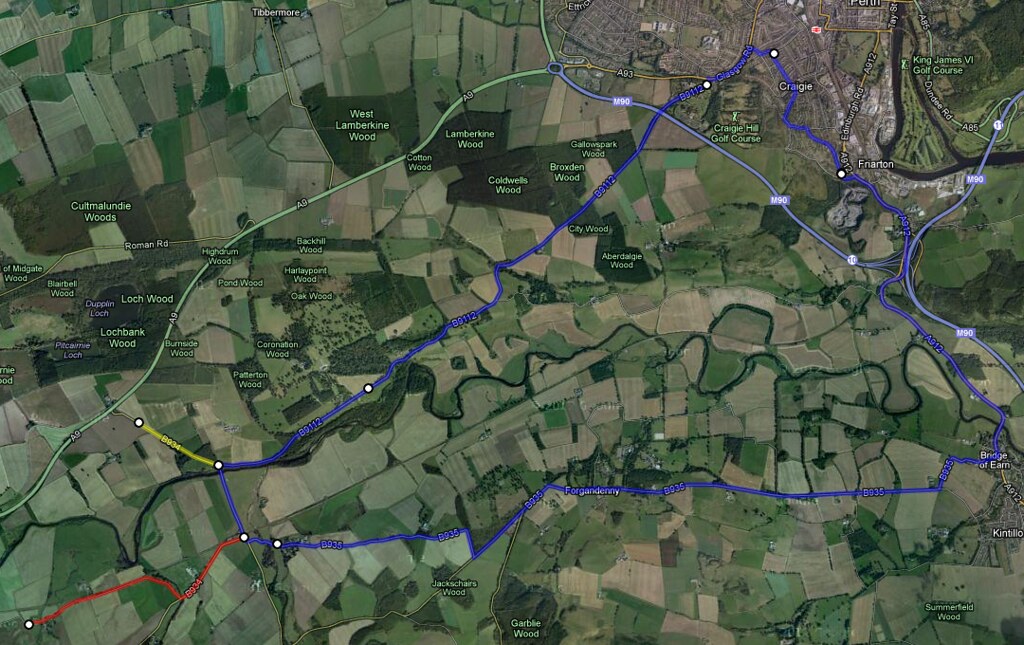 And here is a link to that route on Google Maps: https://goo.gl/maps/Anw1j

I’m just going to mention: on this bike ride I was naughty, and I was listening to an audiobook almost the whole way. I’ve been meaning to re-listen to the audiobook of “Consider the Lobster” by David Foster Wallace for ages. I’ve listened to it before, but it’s abridged, and I recently got a copy of the unabridged text. I read the essays which are missing from the audiobook (very skilfully read by the author himself) which made me really want to listen to it again to complete the experience. Yes, I know it’s dangerous to listen to stuff whilst cycling, especially on roads. I don’t normally do it – though that’s probably because I don’t normally cycle alone. But yesterday it was quiet on the roads and my earphones let in enough background noise, so that I was always aware of any approaching traffic with plenty of time.

It’s a really good book by the way, I recommend it.

Shortly after Forgandenny, it started spitting, and soon it turned into a downpour. I sheltered at the entrance to a farmer’s field, where I stood around and ate my lunch. My Mum had bought some sort of oatmal loaf, and it was pathetic, it had the structural integrity of candy floss. The sandwich fell apart in my hands. Never mind. I was listening to the essay from the book called “The View from Mrs Thompson’s” at this point, by the way. It rained for about half an hour, after which I carried on to Forteviot, where I stopped on a bridge over the railway line to Stirling to drink my Orangina and watch some trains. 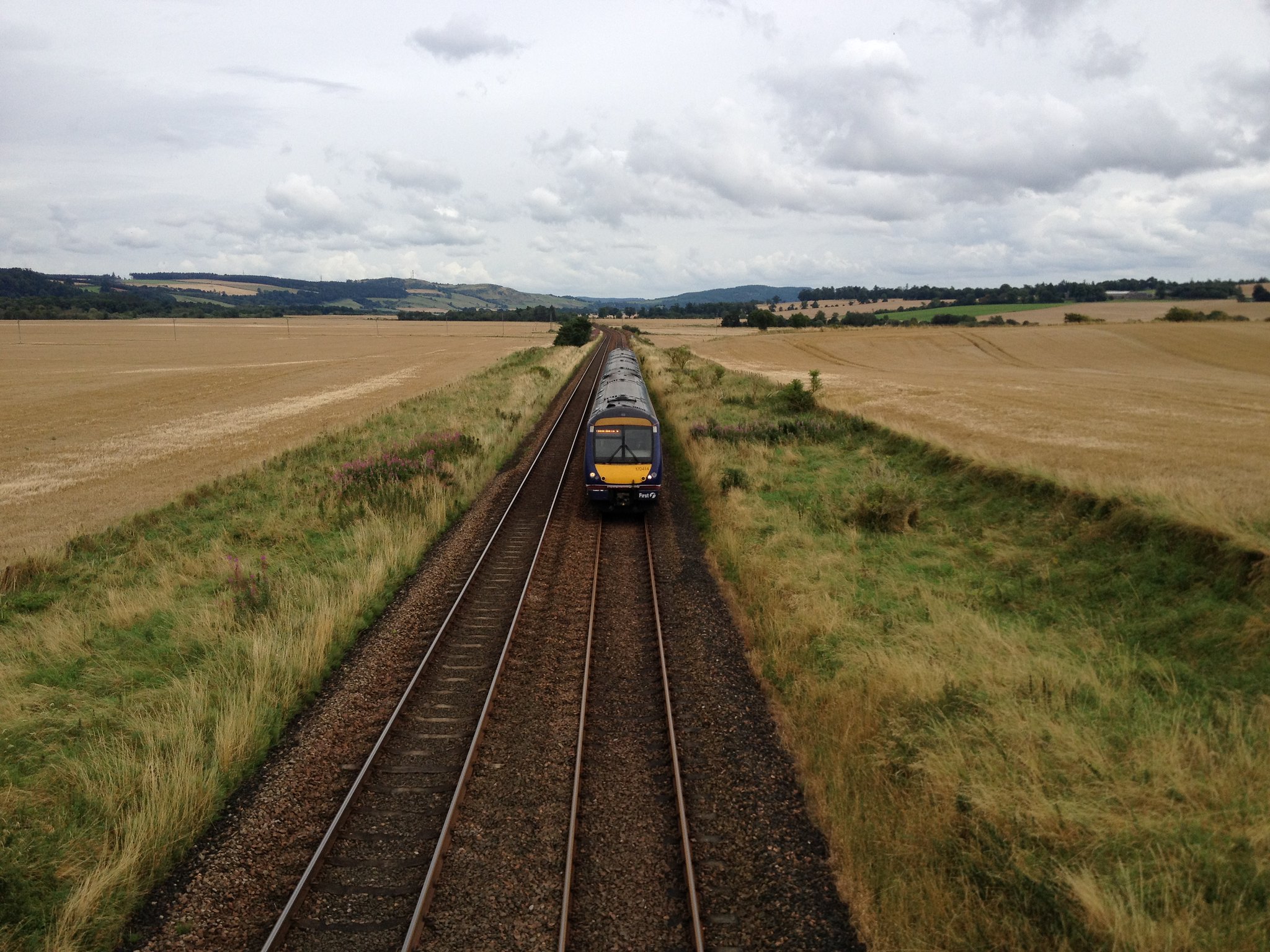 I continued in the direction of Auchterarder for a couple of miles (the red line on the map above), before deciding to turn back and go home.

Which I did… for a little while. And then I crossed the Earn and, to my left, saw one of the steepest and tallest roads I’ve seen in a long, long time. It’s the yellow road on the map above. It isn’t on the route to Perth, but if there’s one thing I love about cycling, it’s going fast. Especially down hills, and especially going very fast. This seemed like a Very Fast Hill. There was no question: I was going to do it. I tried to cycle up, but it was too steep to bother, and walked. I was too impatient to get all the way to the top (the A9 is at the top anyway, I didn’t want to go there) and I stopped, briefly considered sending a text to my Mum letting her know where I was in case I crashed (I didn’t) (send the text, that is), turned my bike around, took out my headphones, got on, and started to pedal.

I pedalled really hard. To get to 10mph, it’s easy. 20mph requires a considerable effort, but going downhill, you can easily reach that speed just by drifting. But at somewhere between 20 and 25mph, I stopped pedalling for a moment, and my speed remained constant: the friction of my tyres on the road and the air resistance of my body almost balanced gravity. From this point onwards, only serious legwork was going to get me to go any faster.

My goal was 40mph. If I was already going 25mph, that’s only an extra 15mph – that’s easy isn’t it, that’s just like the equivalent of increasing your speed from 0mph to 15mph? Right? Wrong.

If you studied physics at school, you will know that kinetic energy increases linearly with mass, but with the square of the speed. That is: Ek = ½mv2. This means it takes twice as much energy to cycle at 10mph if you double your mass, but to carry the original mass at twice the speed, 20mph, it takes four times as much energy.

But as I trundled down the steep hill gaining speed, there were a few further complications. There road was bumpy. There was a bend in the road – it’s not wise to be pedalling at full power when you turn, so I would have to ease off slightly at the bend to avoid losing control. Oncoming cars could appear in my way at any moment. And: I didn’t have much time. The road was fairly long, but at 30, 35mph, you are travelling so quickly that your bike eats up the road and it quickly runs out. I might not have enough space, and still be accelerating when I’m forced to break for the junction at the bottom (with my break blocks which definitely need replacing).

As I turned the bend half way up the hill, I was already doing 32mph – I was covering about 14 metres every second, which is quite a lot if you think about it for a human being. To my delight, the road ahead was completely clear, and I pedalled my legs as fast as I’d ever done before. It felt amazing, and I let out a whoop of joy and excitement – quite like Bear Grylls does when he jumps out of helicopters. My eyes were watering so much that I couldn’t look down at my speedometer, but after my legs burned from the lactic acid generated by my pedalling, I rested and slammed on the brakes. Too early in retrospect – I stopped far short of the bottom, but I had reached my maximum. I had no extra effort left to increase my speed, but I would have enjoyed drifting at speed for an extra second or so.

The fasted I have ever cycled was 40.0mph, down Glenlochay Road in Perth, an incredibly steep road near where I live. I’m not sure how I got to that speed, but I did, and I really wanted to beat it. Crazy.

When I was stopped at the bottom of the hill, I clicked through my speedometer until I reached the maximum speed section. This is what I saw: 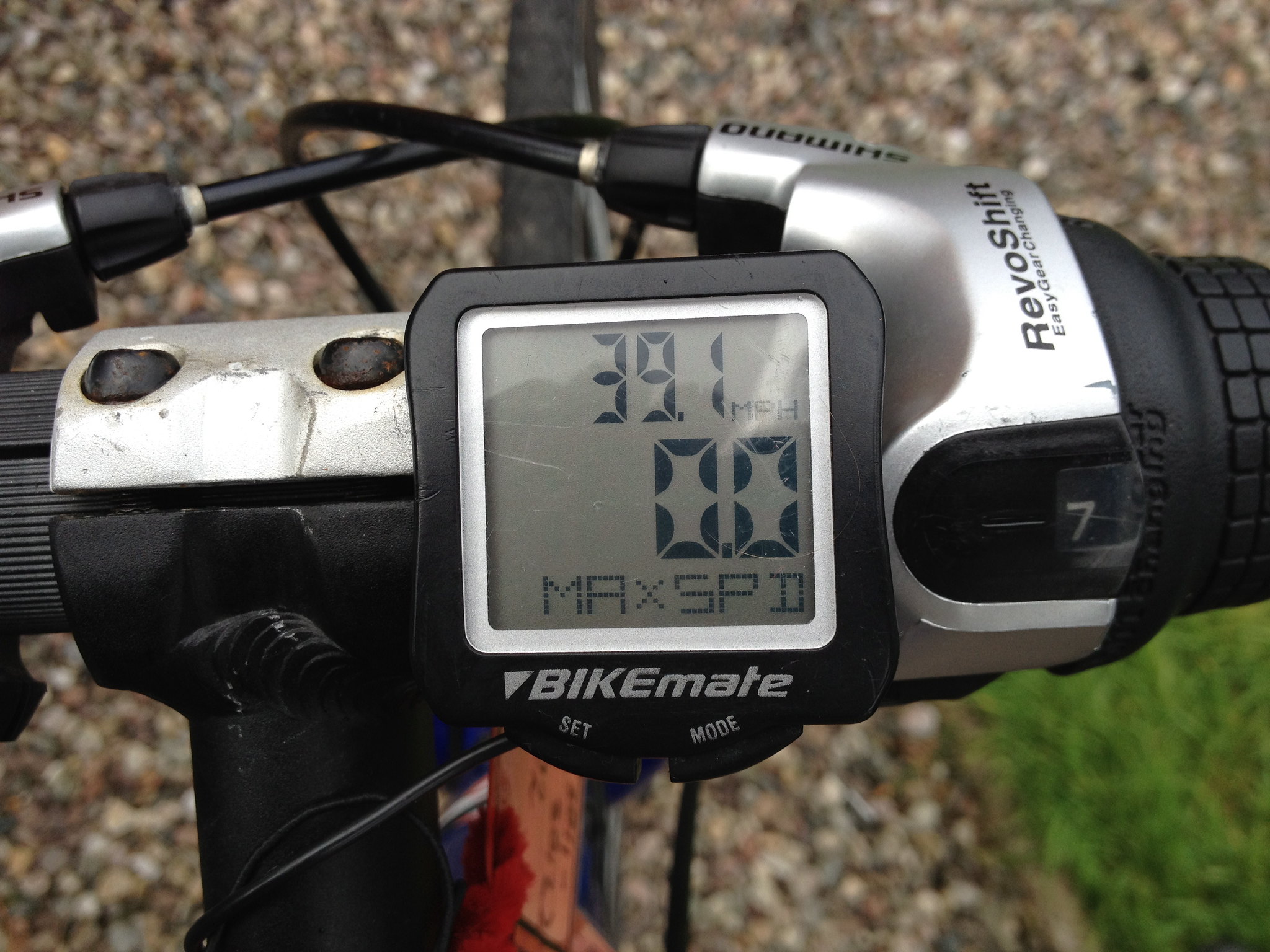 The rain clouds were gathering, it was already raining on the other side of the valley, but I knew I could do better. I knew it. If only I’d hit the brakes later, if only I’d pedalled just a bit harder and longer. So, I turned round and scurried up the hill again to the same spot.

When I got to the top again, the rain was almost upon me: 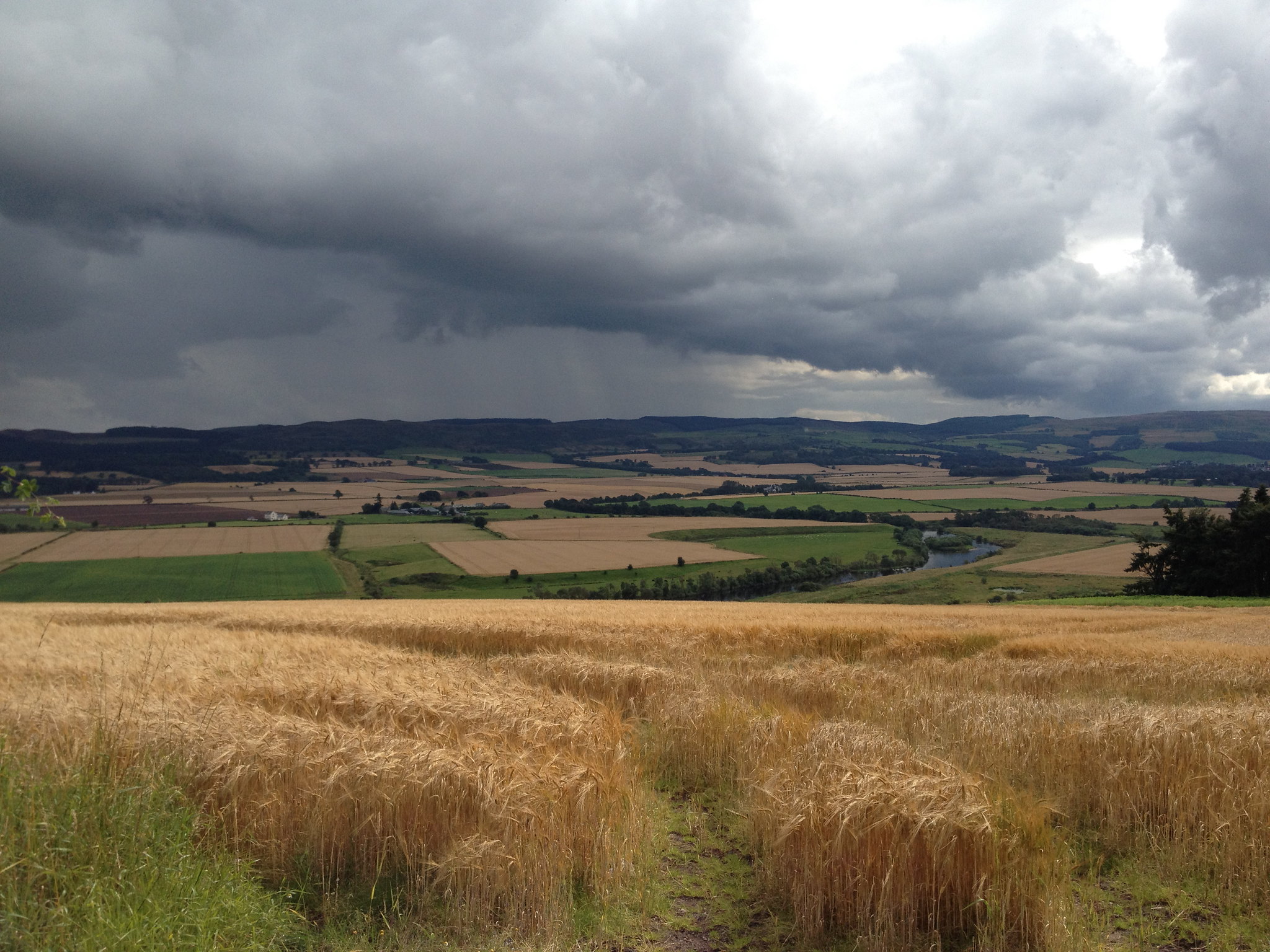 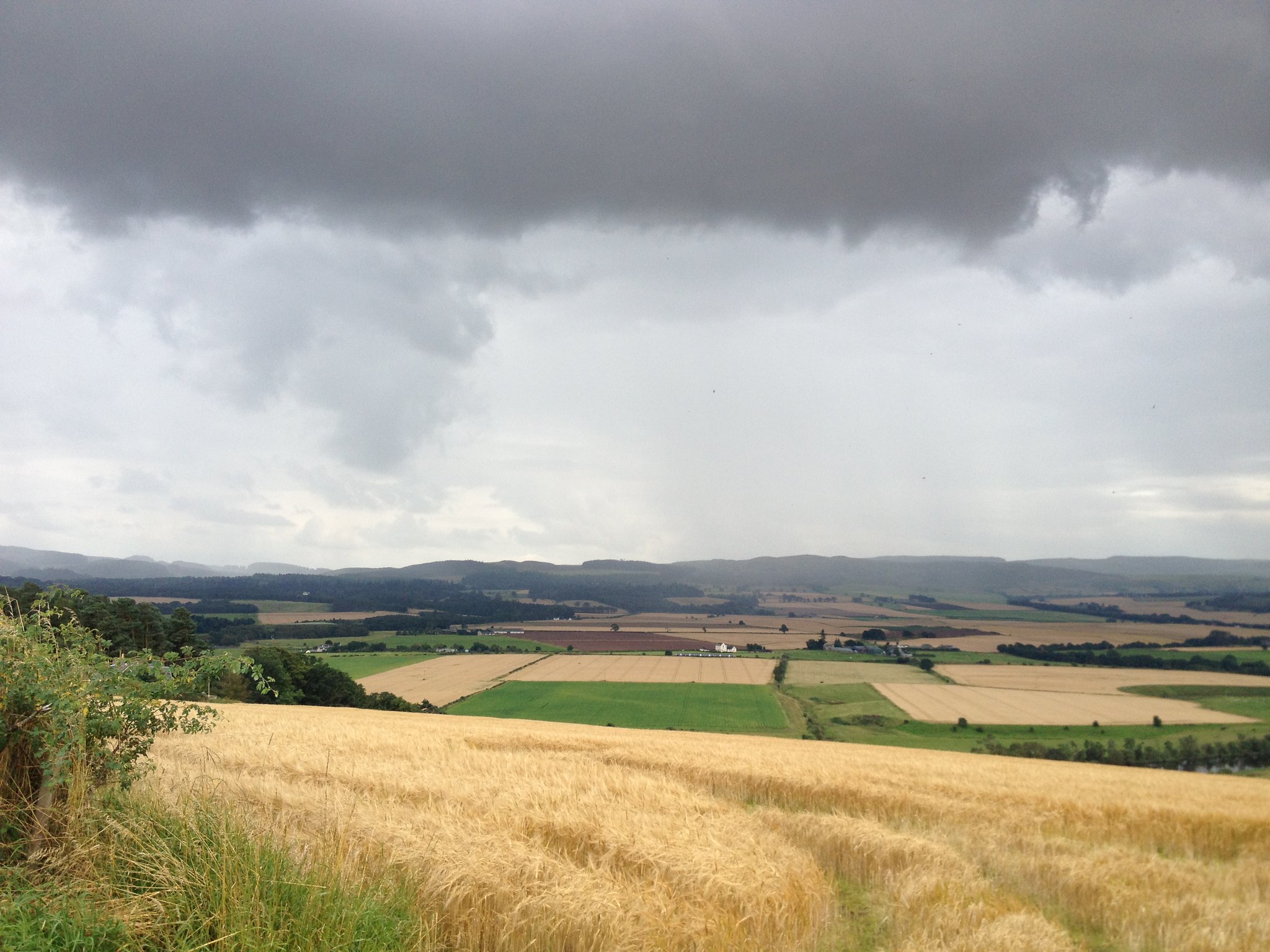 I had to be quick, because a wet road is seriously dangerous at high speeds on a bike. I got on my bike again, but things didn’t go as well: I was still worn out from walking quickly up the hill, the were a lot of cars on the road, and I think I was just a bit tireder. I only managed about 38mph.

I truly had just made it in time, because seconds after I reached the bottom, it started to rain. It kept raining, and got heavier. So heavy, that I could not see through my glasses. They were full of water droplets. I need wipers for my glasses, like a car.

I got off and stood by the road, parked my bike on its kick stand, put up my umbrella (good job), and got out my iPhone. It was time to see how long this rain would last:

Fuck. There was a lot of rain in the Perth area for the whole evening, it might not stop at all.

The heavy rain persisted for half an hour, during which time I continued to listen to the audiobook, until it slowed and eventually stopped, and I could cycle the 6 or so miles home.

I stopped by some brambles to pick some tasty ripe blackberries, and then got back on my bike, refreshed.

I passed the entrance to a country estate: 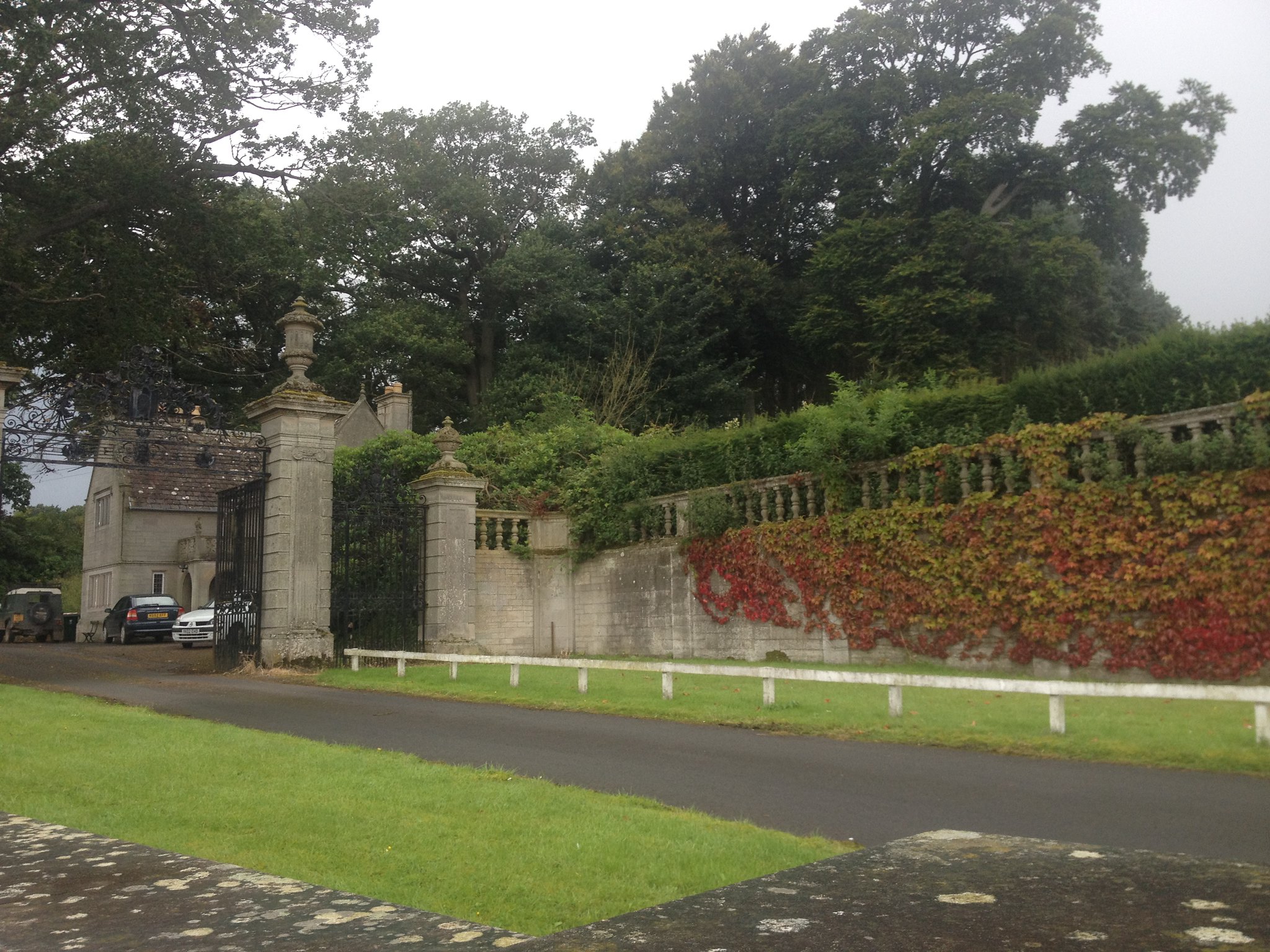 And at Milltown of Aberdalgie, as I was was dismounting – to climb another hill on foot – I got a phone call, from Emily. It was a lovely surprise and exactly what I needed to revive me after hanging around in a downpour, exhausted, for half an hour. We talked as I climbed the hill (which was the back of Craigie Hill), and when it ended, I was just about 3 miles to my house, mostly downhill. 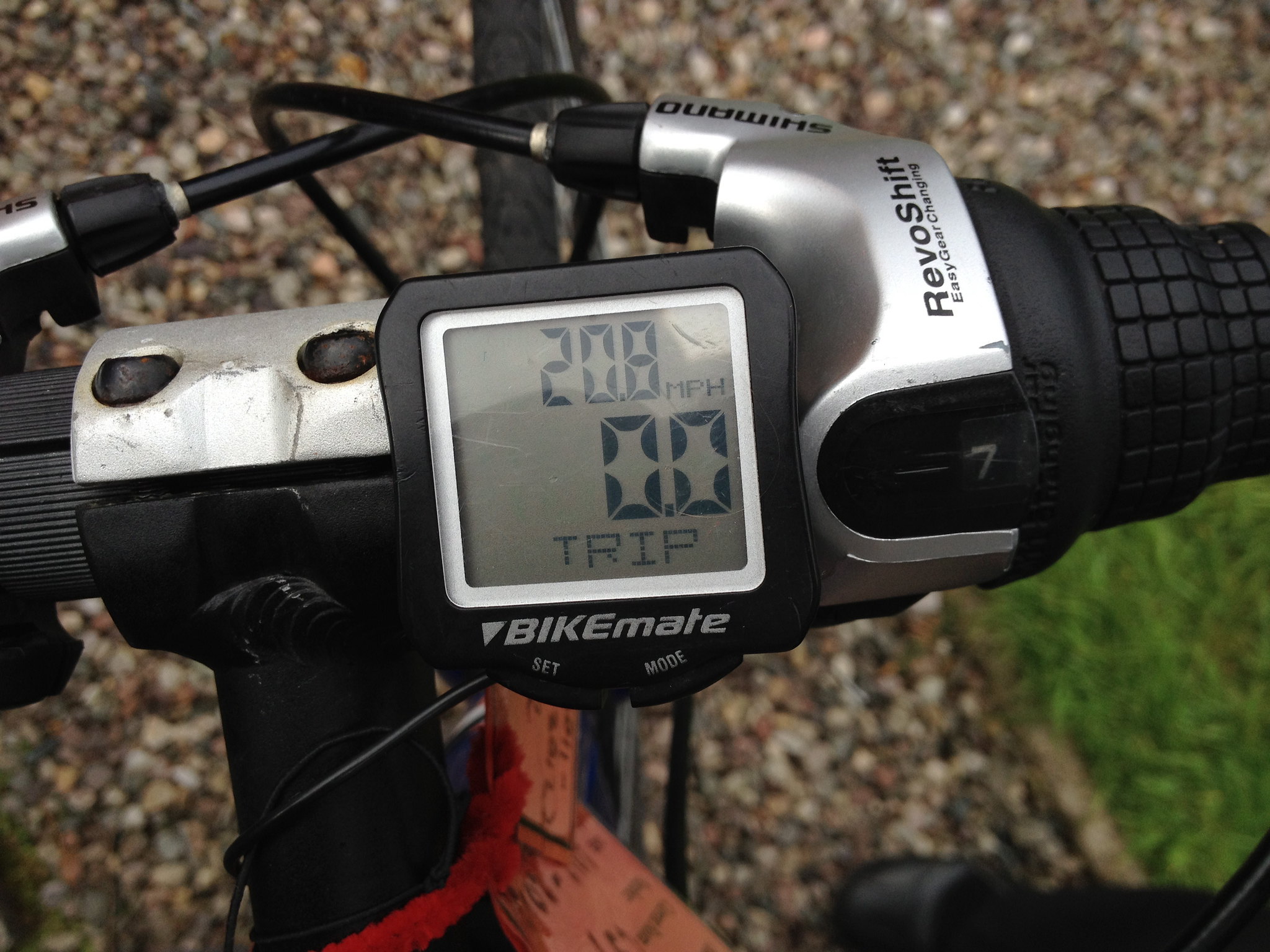 If the weather’s nice, I’m going on a ride tomorrow, too.