I’m going to miss the RAF when I leave St Andrews, or when the RAF itself leaves Leuchars. Yesterday was a perfect example of why.

For the 2012 airshow display season, the RAF’s Typhoon Display Team was based at Leuchars, and was operated by members of 6 Squadron. I loved the Tornado F3 in many ways and I still miss it, but I can’t deny that the Typhoon (which replaced the F3 at Leuchars last year) is an incredible aeroplane. 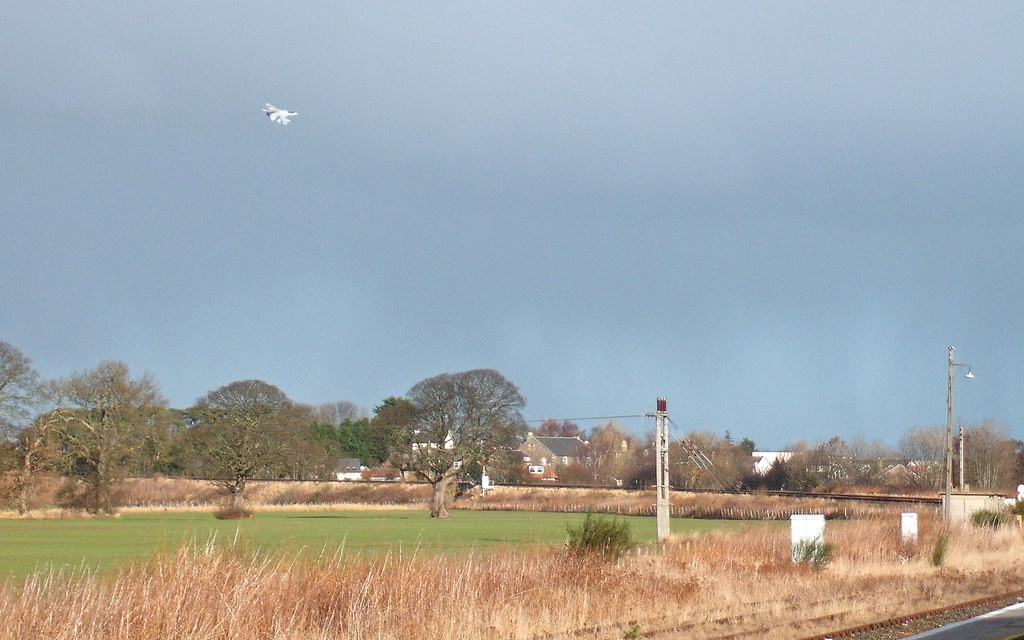 A Tornado F3 of 111 Squadron circling to land at Leuchars. 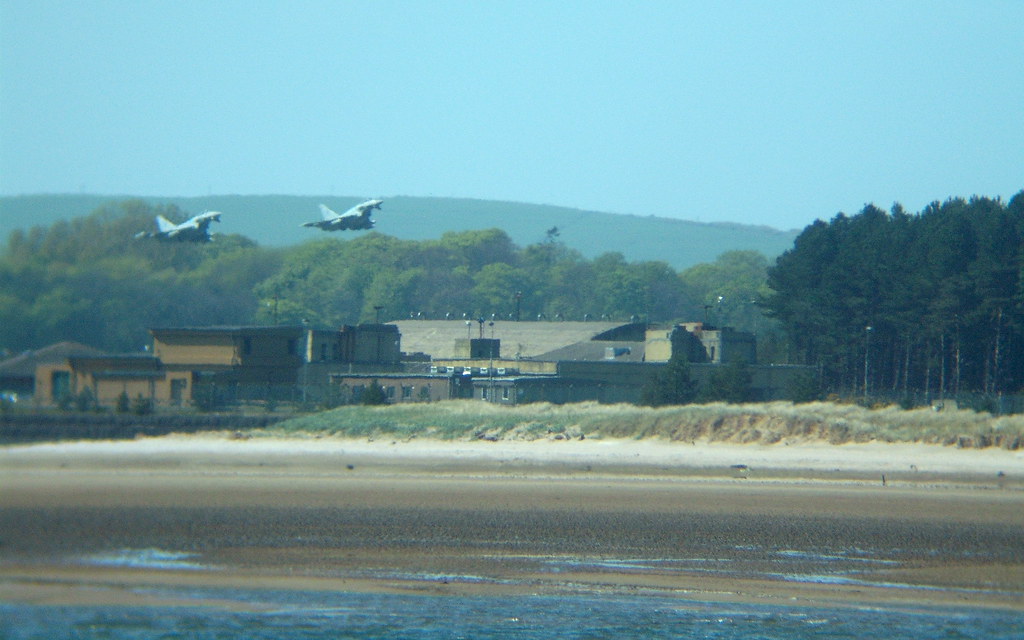 2 Typhoons taking off at RAF Leuchars

The Display Team website is full of information, and I recommend that you give it a browse. This was the most impressive statistic that I could find:

When fully loaded the aircraft can climb to 35,000 ft from releasing the brakes in 90 seconds.

Almost 7 miles directly upwards, from a standing start, whilst being heavily laden down. Wow.

During the run-up to this summer’s airshow circuit, the pilot Scott Loughran was practising his routine in the skies over RAF Leuchars in up to 3 timeslots per day. There was sometimes a practice at 8am, at 12:30pm, and again at about 4pm, with the frequency of practices peaking in late April or early May.

Sometimes I missed the displays because I was in the shower or in bed or in a lecture, but quite often I did get to watch them – or at least see some of them. Due my lecture schedule, I rarely got the chance to walk somewhere to see the display close up (only once was I actually at the end of West Sands, directly under part of the display) but, when I heard the distinctive noise, I would often be able to step out of my house and find a vantage point, or settle down on a bench to eat my lunch. I would mostly admire the routine from the comfort of St Andrews. 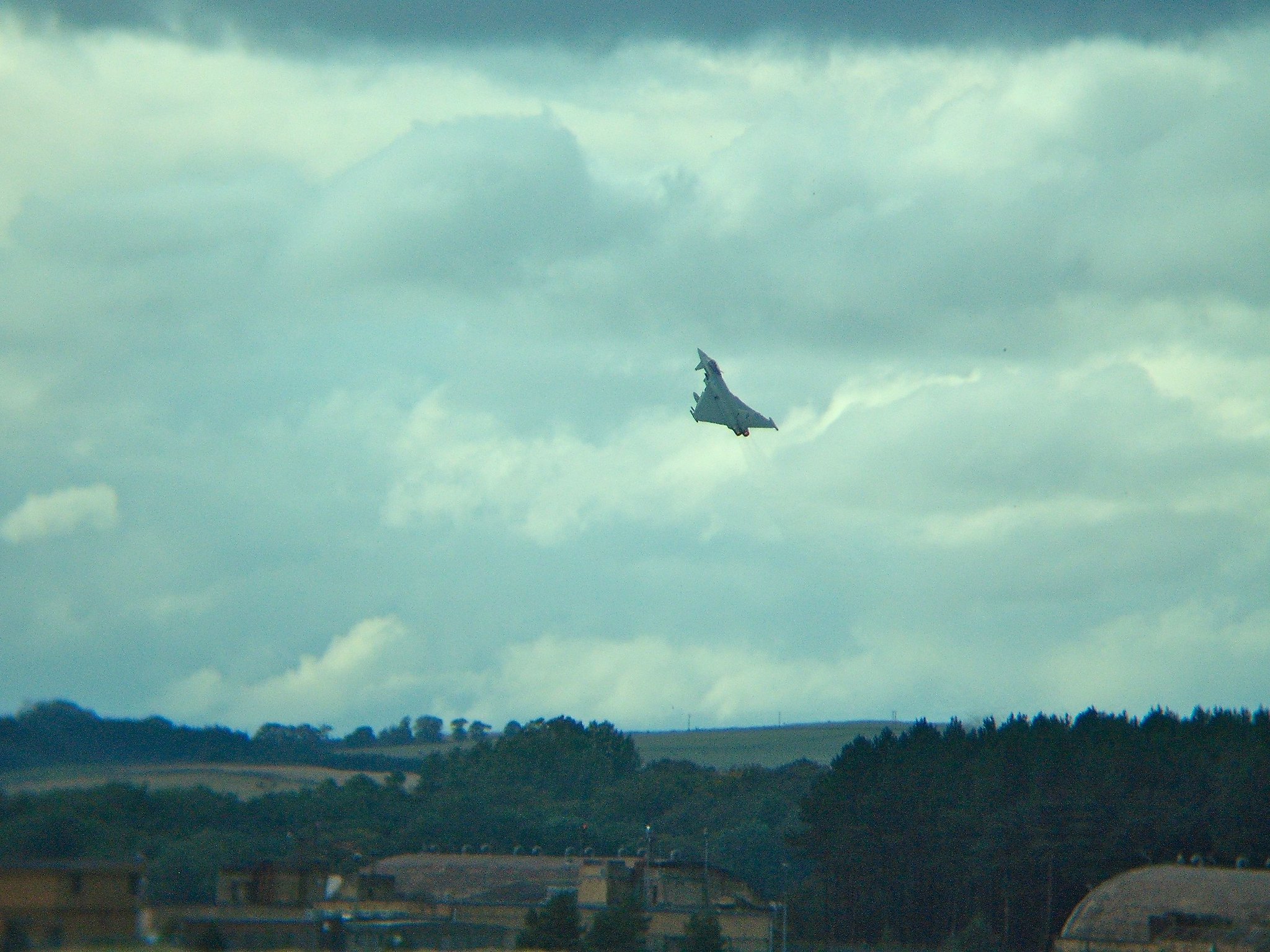 Typhoon doing a ‘performance takeoff’, using afterburners to climb at an incredible rate and angle.

Yesterday was such an occasion. The airshow season has finished – the Typhoon performed its last public display at the Leuchars airshow on 15th September (which I watched). Yet last Thursday, RAF Leuchars posted an exciting message to their Facebook page, which read in part:

Over the next 24 hours, it is planned that Squadron Leader Scott Loughran will fly up to 3 routines over RAF Leuchars in order that he can complete his responsibilities for 2012 and successfully handover the role to Flight Lieutenant Jamie Norris who will be the Royal Air Force Typhoon Display pilot for the 2013 airshow season.

Yes! What a treat.

And so it was that I heard a takeoff at 8:30am on Friday. That was suspiciously early, I thought… until I remembered the Facebook message which I’d read the previous day! I put on my coat, grabbed my bag, and headed for a door, and took an earlier-than-intended, but amazing, walk to Maths.

It was a couple of days before BST ended, so the mornings were still very dark last week. When I stepped onto the coastal path, the sun had only just started to clear the cliffs to the east, presenting me with an amazing sunrise. 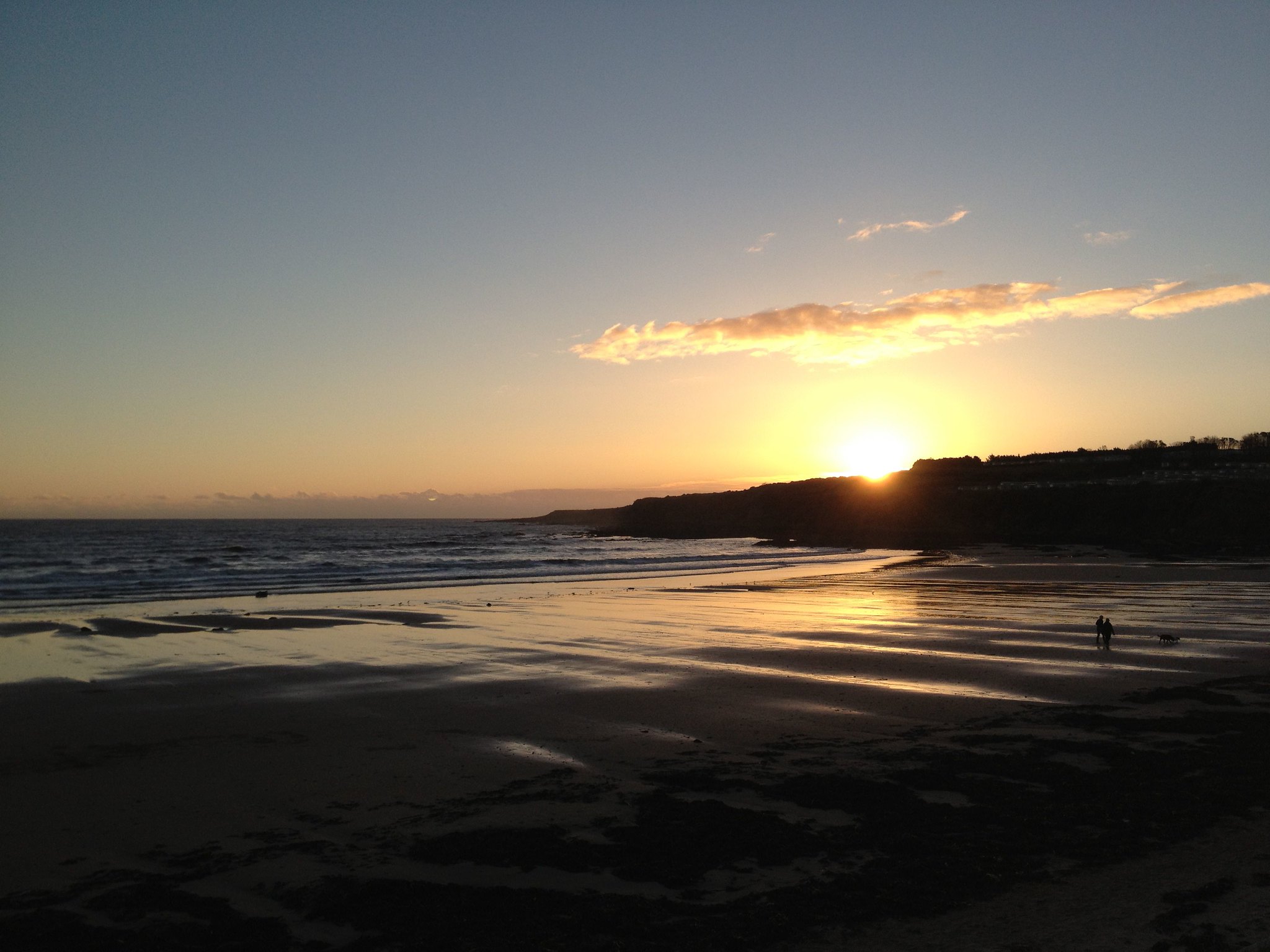 The Sun had just risen over the cliffs by East Sands.

The Typhoon hadn’t started practising yet – but I set eyes on it the moment I left my house. It was a couple of miles out to sea, at a reasonable altitude, doing dives and twists and loops and other strange manoeuvres. I took a few photos of the morning light, and as I started my walk to class, the Typhoon headed toward Leuchars, and started its display.

Being his first display in a while, Scott performed the display at a higher altitude than normal for safety. This would be disappointing if you were close up, but for me, it was perfect. I would have only been able to hear a low-down display, but higher up, I could see him, even from down near the beach at East Sands. 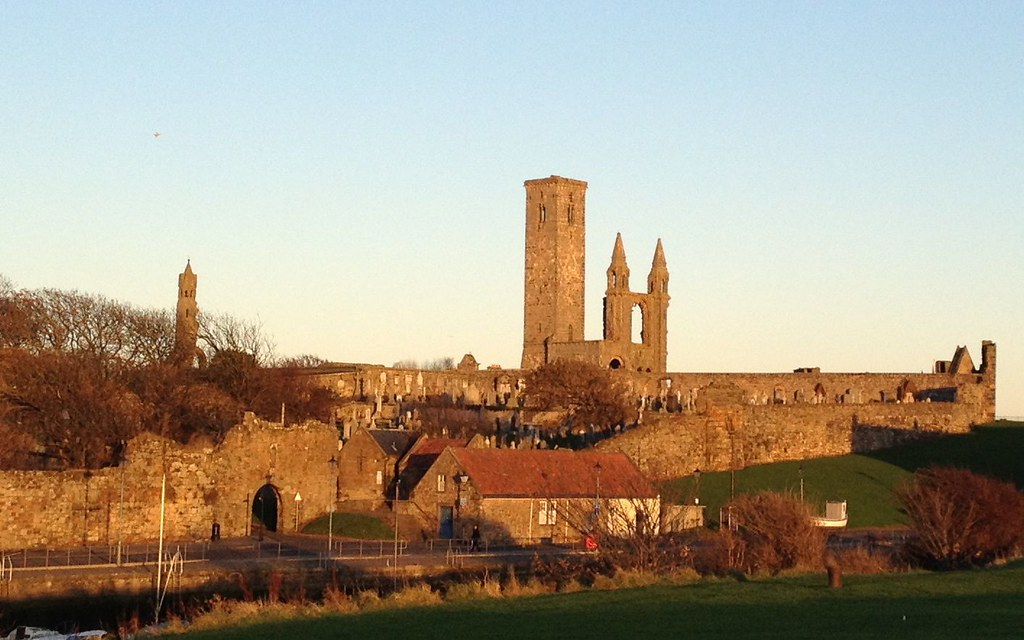 In the large version (click the image), you might just be able to make out the Typhoon, orange in the morning light.

The warm morning light lit up the aircraft beautifully, and when the glint of the sun was matched with the glow of the afterburners, the sight was incredible. The roar of the plane and engines cut through the cold morning air, to produce a deafening sound. The display included many high speed passes, inversions, stalls and an impressive near-vertical dive, finishing with a vertical climb. At one point, due to my slightly raised perspective in St Andrews, the Typhoon dived below the roof-line of a faraway building, giving the illusion of being about to slam into the ground and explode. Thankfully it didn’t, and a few seconds later I heard a boom of reheat as the Typhoon forced itself upwards.

10 minutes after starting, the display finished, and I continued my walk to class in peace. 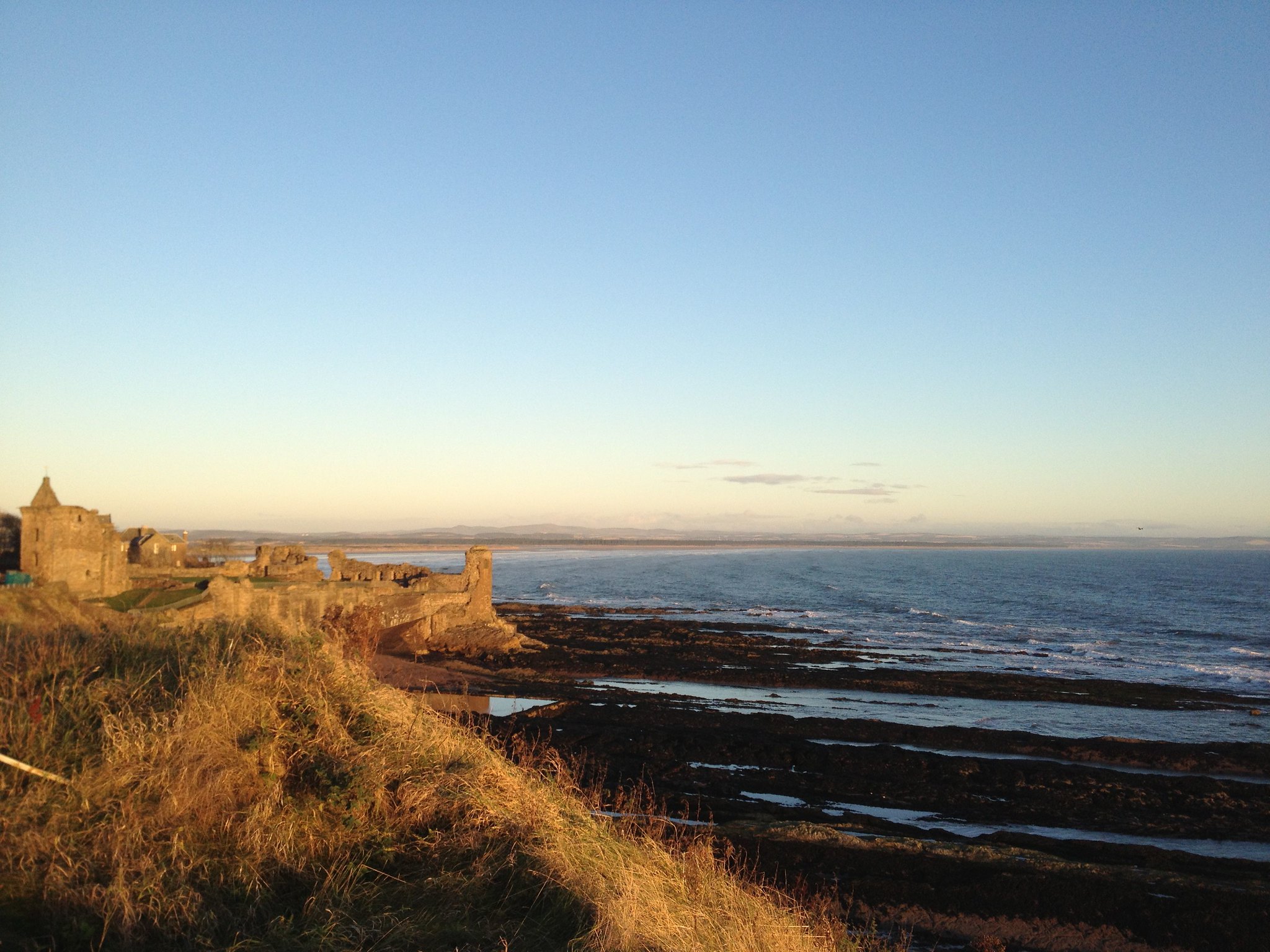 This is where I watched the end of the display.

Scott performed another display at 11:45am, but frustratingly I had a lecture until 11:55am, at which point he’d finished. I headed to the end of West Sands, hoping that he’d perform a third and final display in the afternoon slot – around about 4pm – but he didn’t, and walked to my tutorial slightly disappointed. 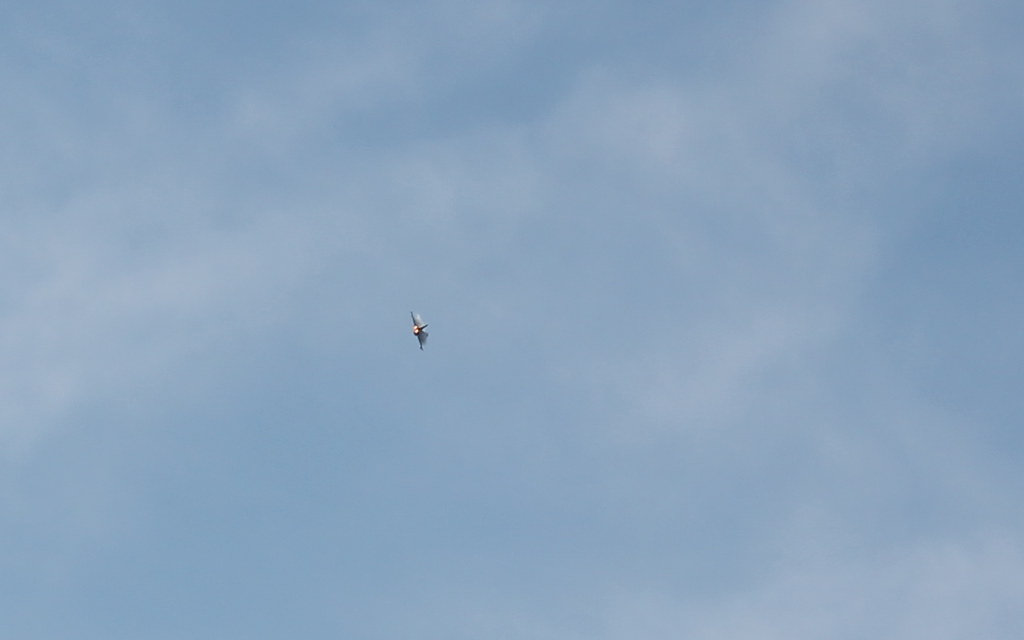 Typhoon banking and using reheat during an earlier practice display.

Until yesterday. It was around 12:40, and I was sitting in the library, trying to ‘qualitatively’ solve some systems of differential equations, when I heard a suspiciously loud Typhoon takeoff. I listened for a few moments to see if the sound would trail off – characteristic of a departing plane – but the sound remained, and it was clear that something was afoot. Something loud.

I stood up from my desk, and walked out of the building and sat on my nearby favourite bench, where I often eat lunch. The sky to the north was dark and full of rain, but over Leuchars it was calm, except for Scott Loughran throwing his Typhoon around. It was just like all of his other displays – only better. Maybe because it was his last. The contrast of the copious reheat with the dark clouds behind the jet was breathtaking, as were the speed and tight cornering. He was having fun out there, and I was having fun watching him.

If you ever get the chance to watch a fast jet display: do it. It is absolutely thrilling. It has been a privilege and a joy to be able to be follow the development of a display, and watch its iterations throughout the year. I’m sad that 29 Squadron at RAF Coningsby is taking over the role next year, but I definitely made the most of the opportunity this year. Make hay while the Sun shines.

It certainly brightened up my days. Thanks Scott, and thanks RAF. 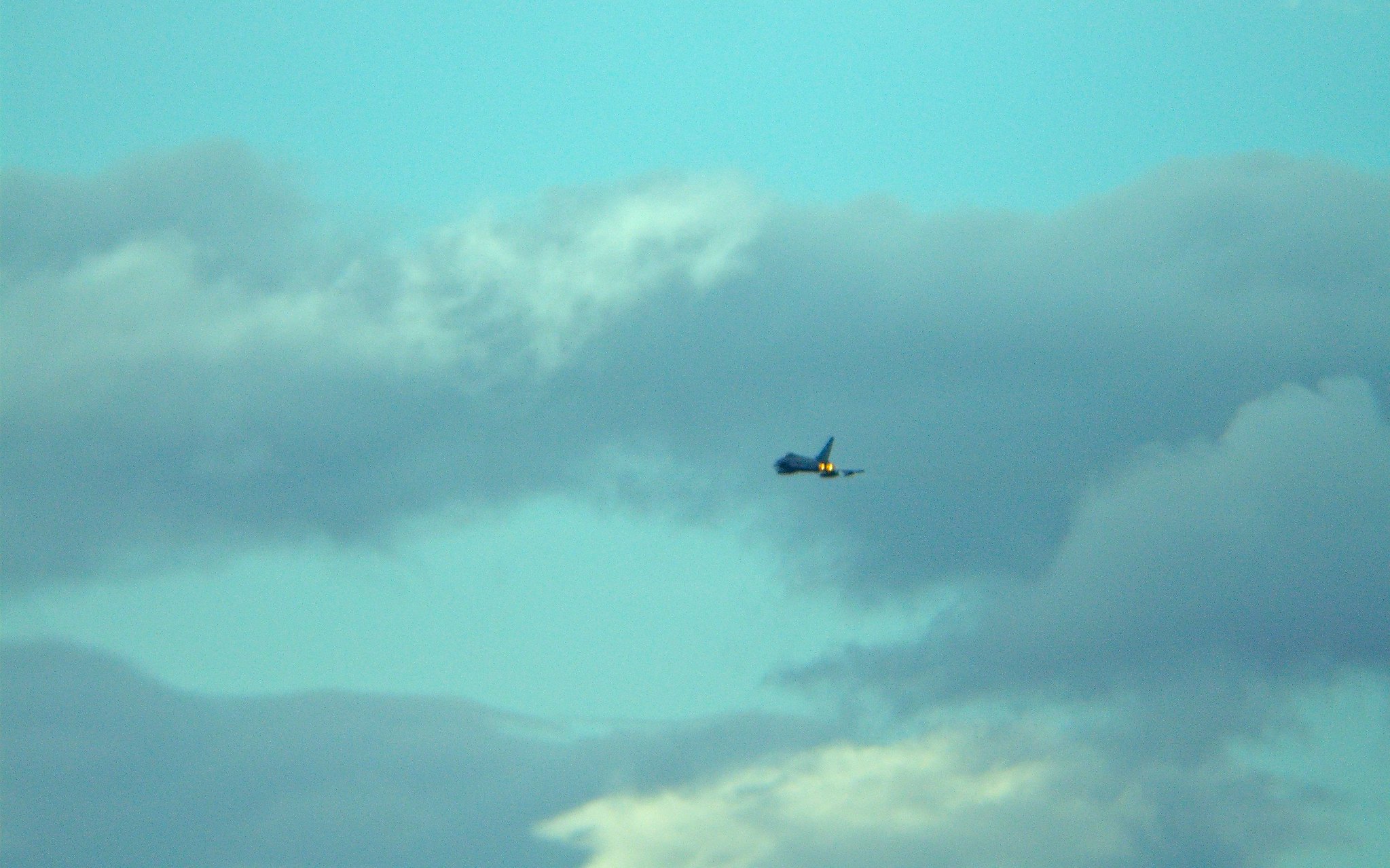 A Typhoon using afterburners during a high-speed low pass. 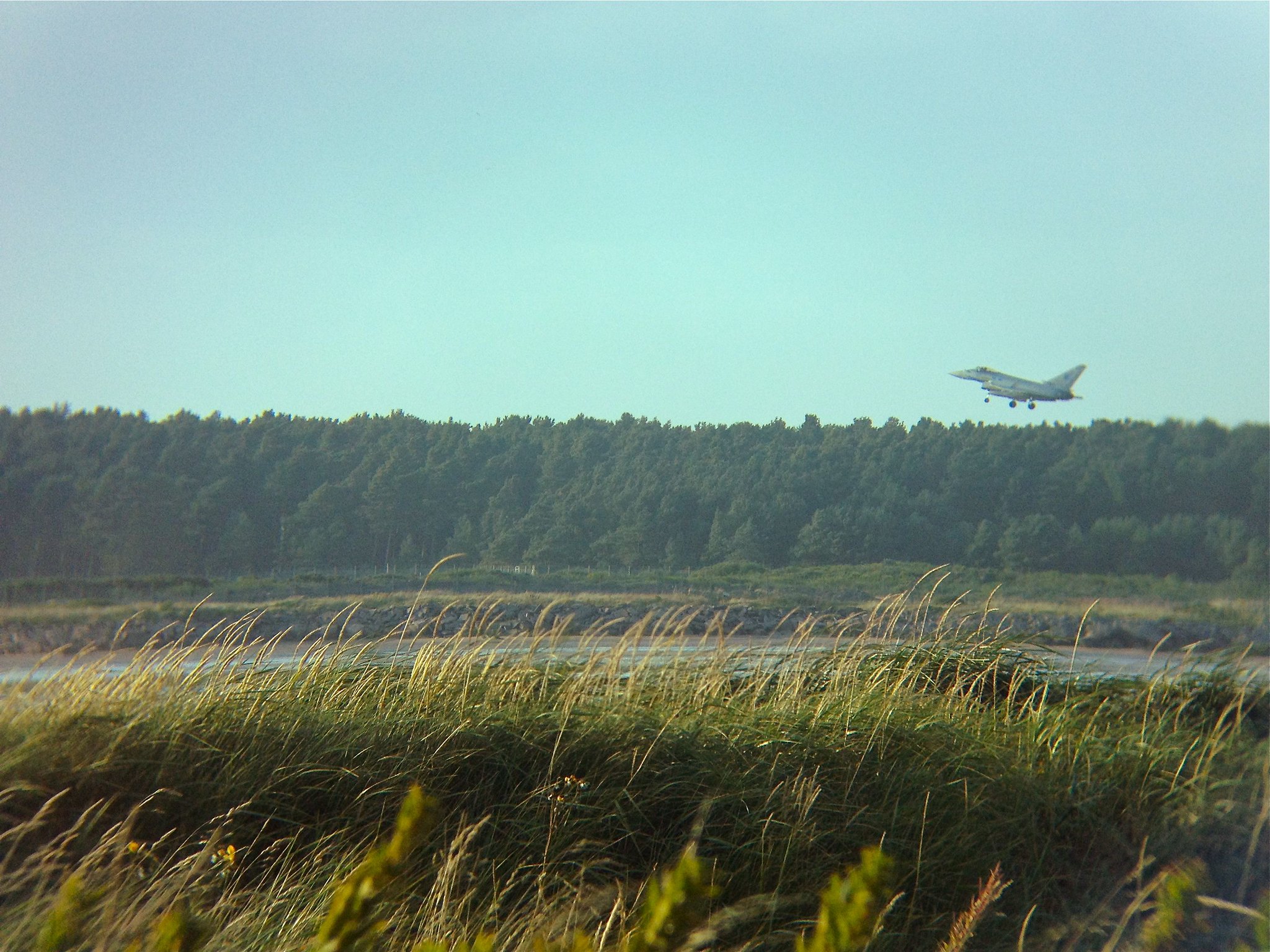 A Typhoon landing after the Leuchars airshow in 2012.