Gardening, Me & My Life 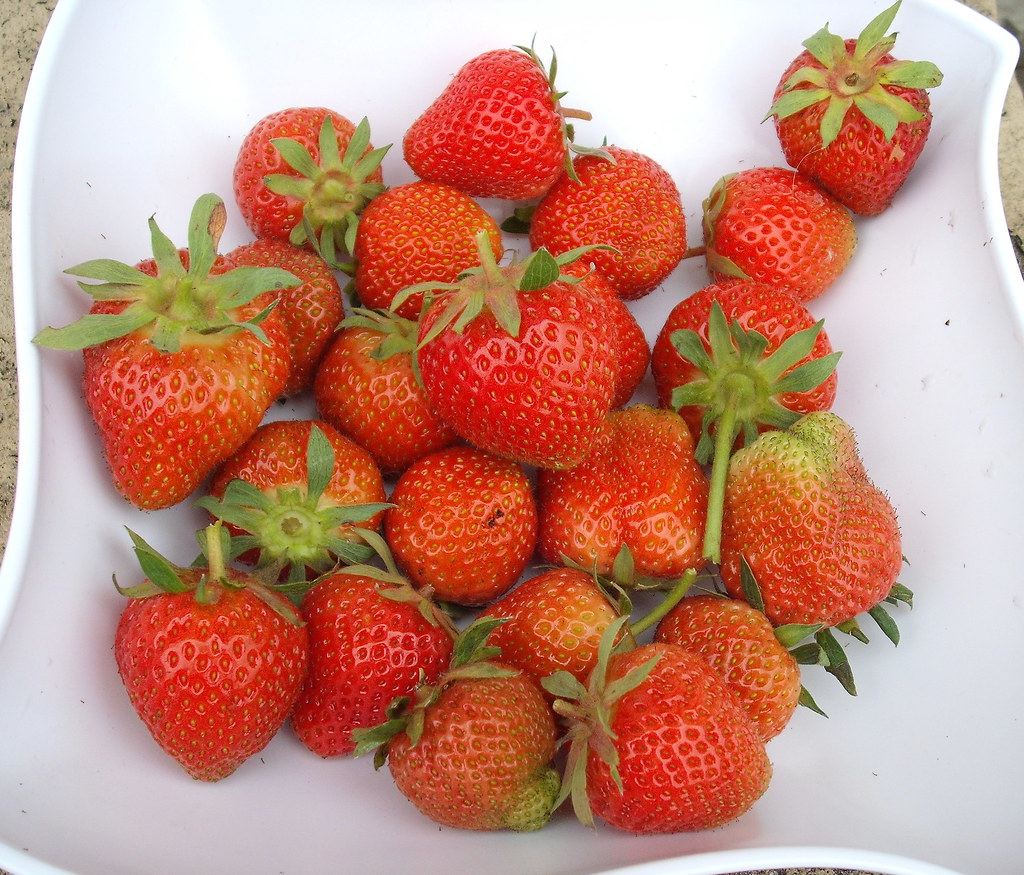 Last year I grew strawberries seriously for the first time, and I wrote about the experience at length, here on my blog. In the concluding sentences, I wrote:

Finally, what will I do with these 100+ strawberry plants? I’ve not decided. I think I may be able to find room for another 20 in the front garden, but the rest will need to be planted elsewhere. Yet I can’t bring myself to throw them away – as I’ve said, I’d much rather have strawberries than no strawberries, and I’m happy to do the work to make that so.

As it turns out, I did put in the work to make it so. For much of my spare time in August and early September, I set to work. I put new runners into pots, and once they had established I found a spot for each one in the front garden, pushed aside the gravel and then cut through the ground sheet in order to plant the runner into the ground, well fed with compost. By the end of summer, I had well over a hundred new plants in my front garden.

I went to university, and whilst I was away: they grew. But not straight away. Once again, the leaves died back, and once again came a harsh winter. The whole garden was covered in several inches of snow for at least a month. 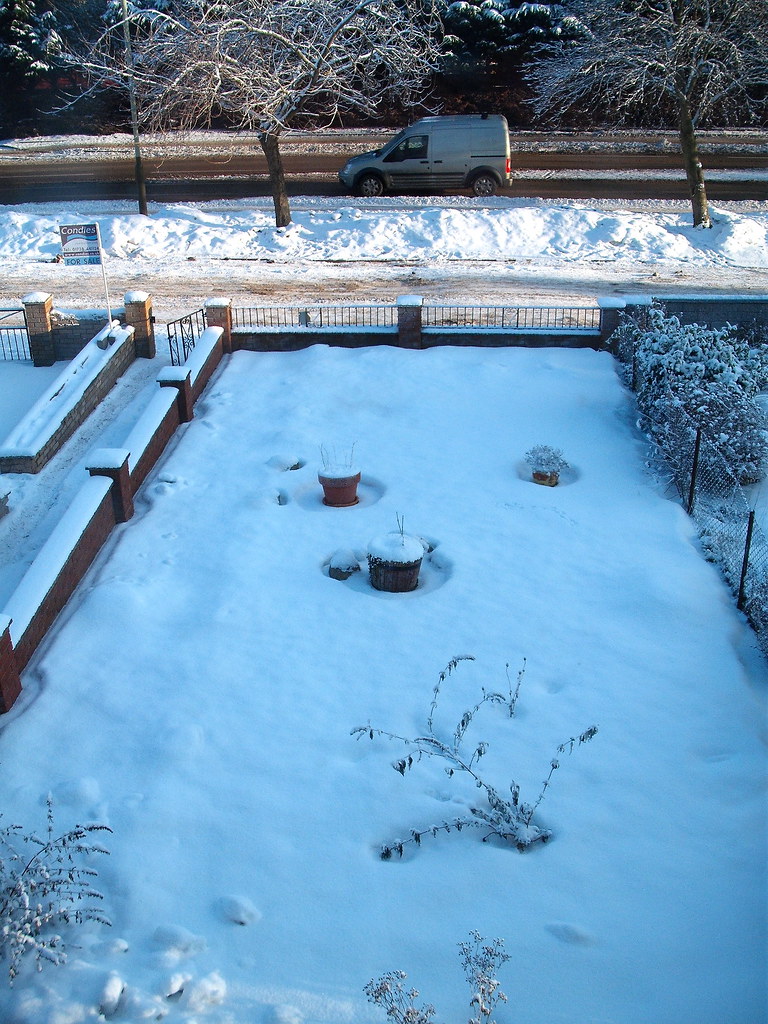 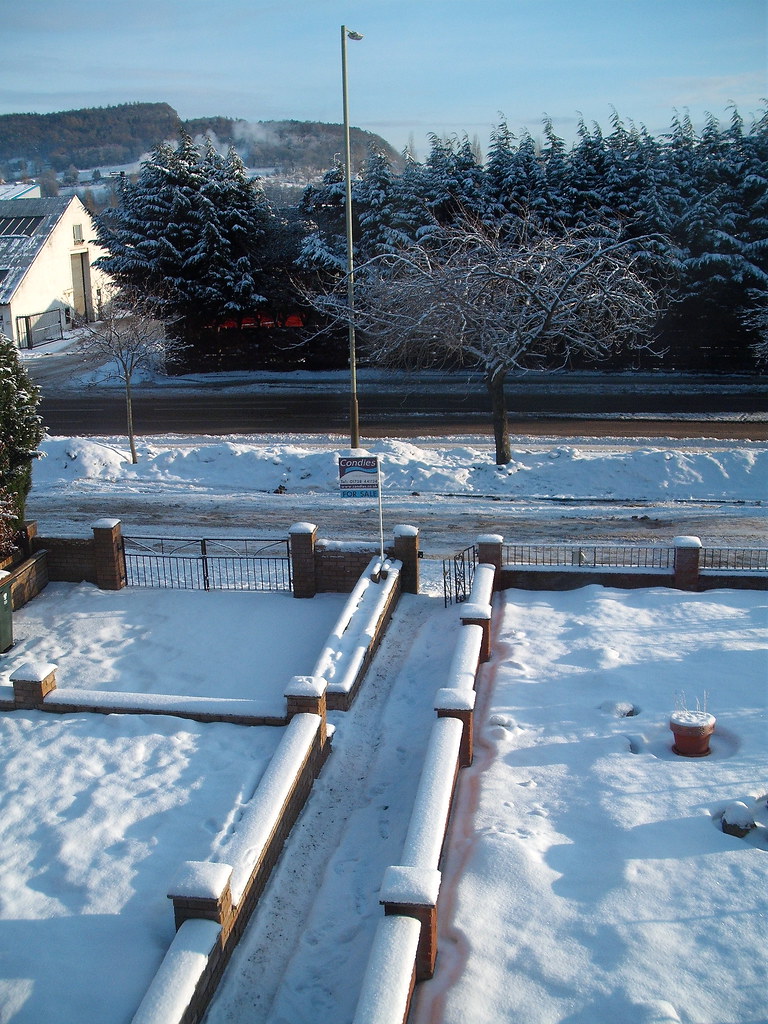 Yet despite the cold, once the snow had gone and the days started to get longer, they started to grow again. In early March when I visited for the weekend, I saw the first few signs of new growth: 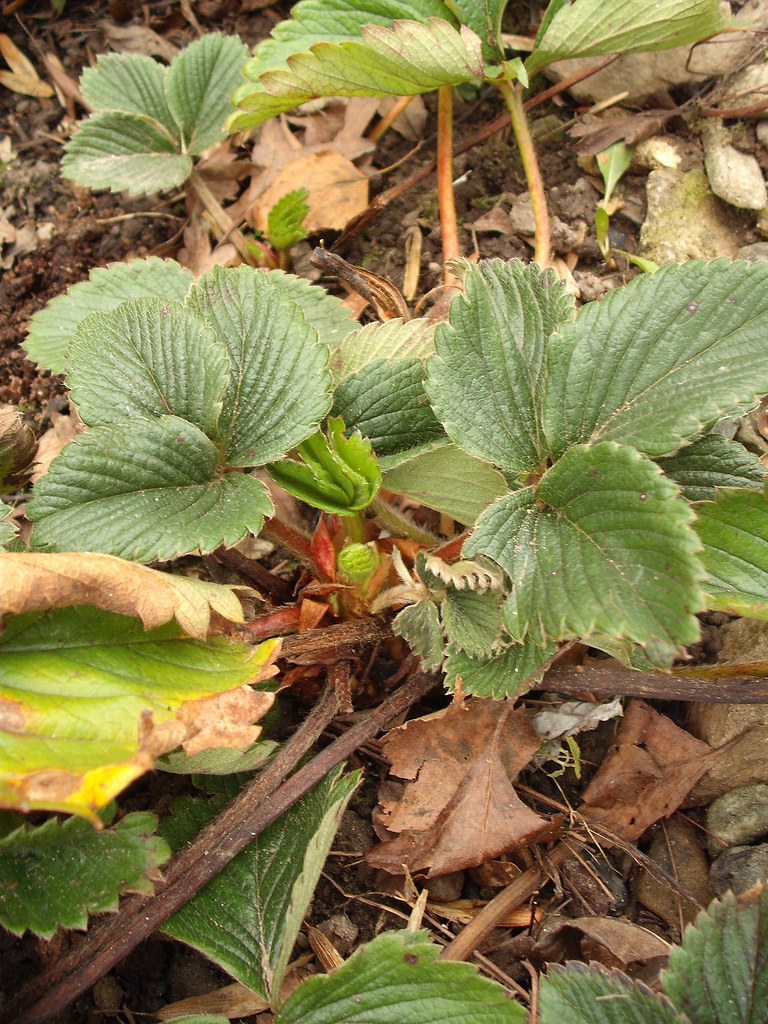 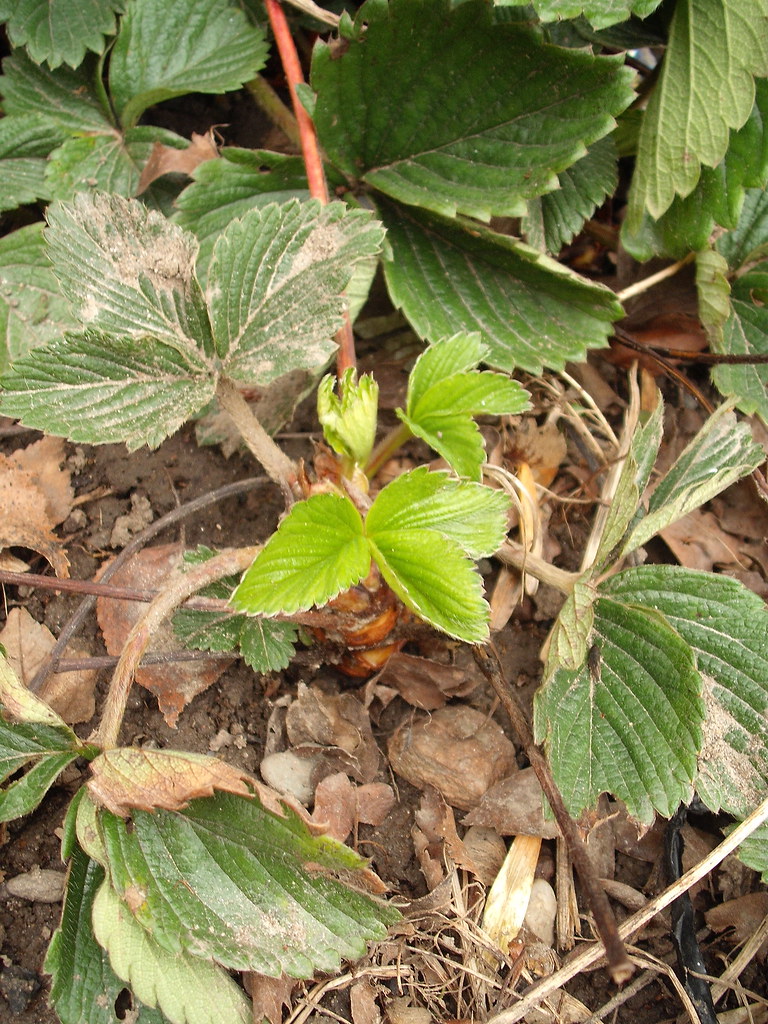 Not much, but enough for optimism.

The next time I was in Perth was at the end of April, on the weekend of the Royal Wedding. My plants had come on amazingly well by that time: they were reaching up to the Sun, a bright green colour to the leaves, and many plants were already flowering. 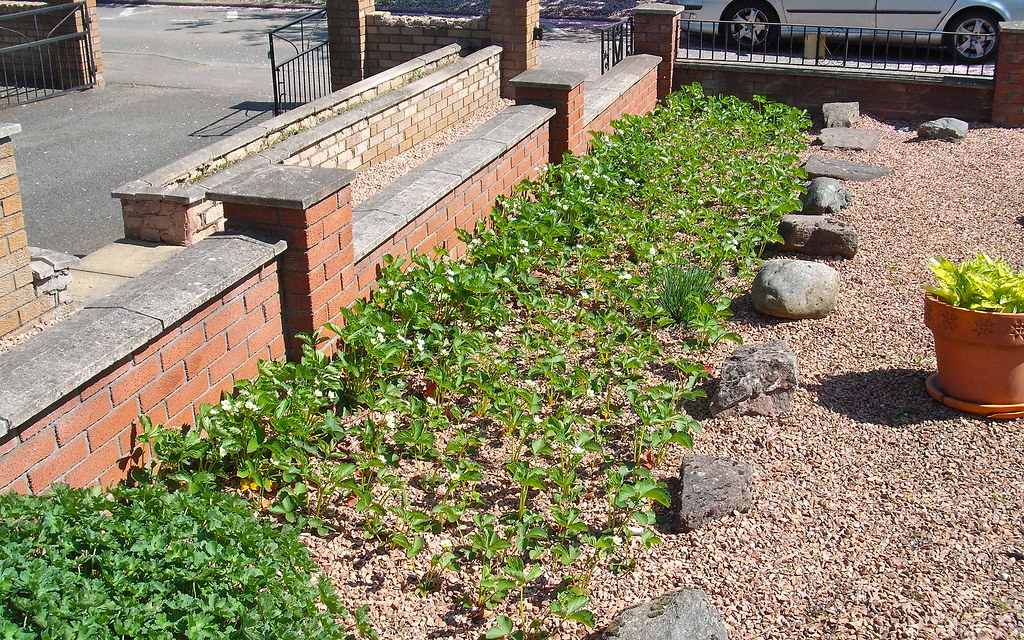 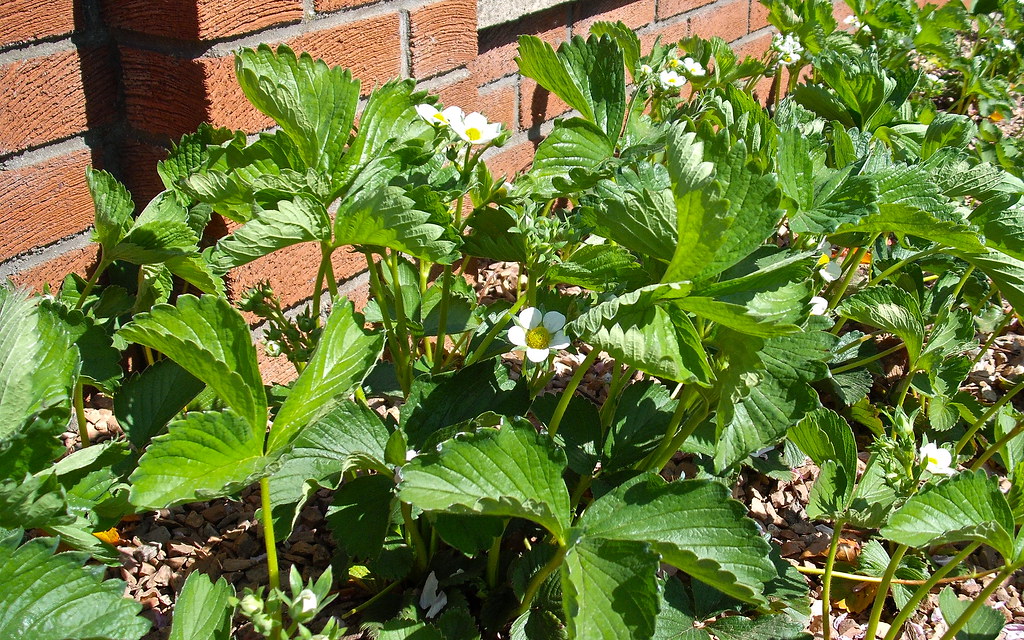 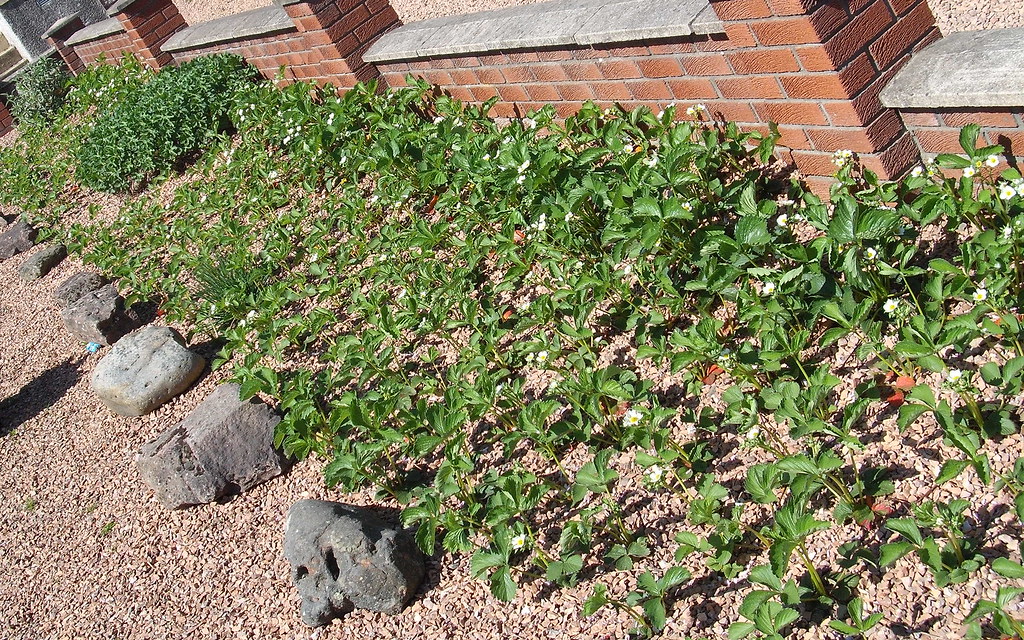 I like to think that Theo’s wave helped them along ((Theo’s my nephew.)): 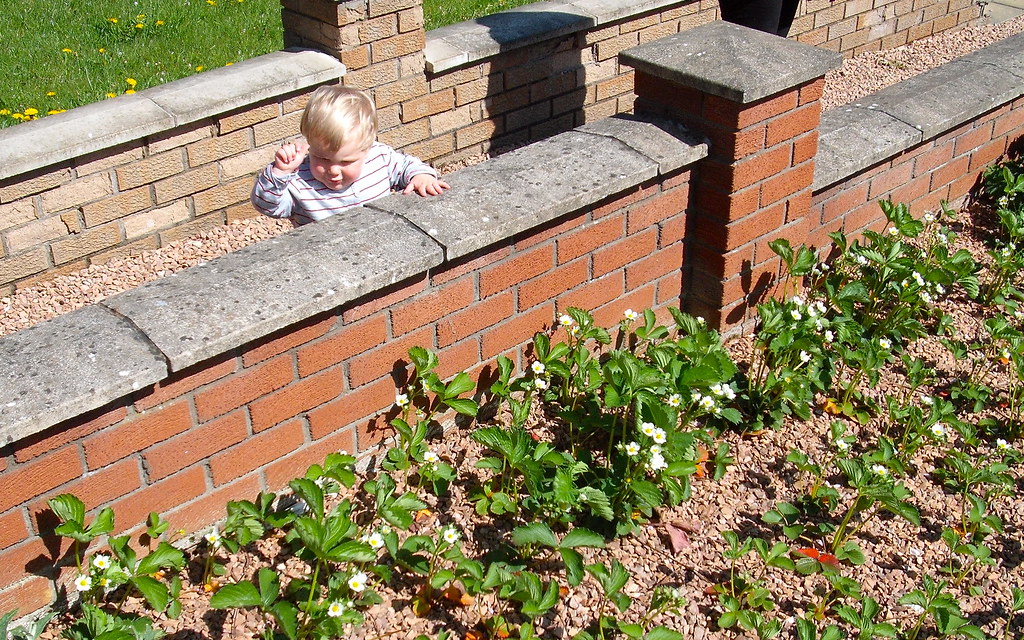 The next time I was home was when I moved back from university at the end of May and many of the flowers had turned into berries that were close to ripening. Last year I picked my first berry half way through June, on the 18th. But this year, with my front garden plants better established, I had my first sample around about the 2nd, more than two weeks earlier than before.

The birds were wise to the ripening too, and I lost many of my early berries to blackbirds. Bastards. Like last year, I again tried to protect my ripening berries with clear plastic bottles, which seemed to be effective (although I didn’t have nearly enough bottles to protect them all).

Here is my first significant picking session, from the 6th June:

As you can see I was a bit impatient, and they could have done with an extra day or two to ripen on the plants. However: fuck that, and anyway, the birds might eat them if I wait. Picking berries a day too early was a recurring problem for me for a while, as under the bright direct sunlight of the afternoon the colours are exaggerated and it makes the berries look riper than they actually are. I eventually learned to wait longer before picking a ‘ripe’ berry.

OK, the numbers. This is what happened last year:

The total yield was approximately 4.5 kilograms, equivalent to 10 supermarket punnets – about £20 worth!

And my prediction was:

What with my more mature plants, as well as the new ones I’ll plant, I predict I’ll grow at least 10 kilograms.

Heh. Yep, I beat that prediction. I grew 34kg. THIRTY FOUR FUCKING KILOGRAMS. That’s equivalent to £170 worth of the 400g punnets that Tesco sell for £2 at the height of the season, except it’s not equivalent as mine would surely be Tesco Finest and far more expensive.

I was amazed I grew so many. 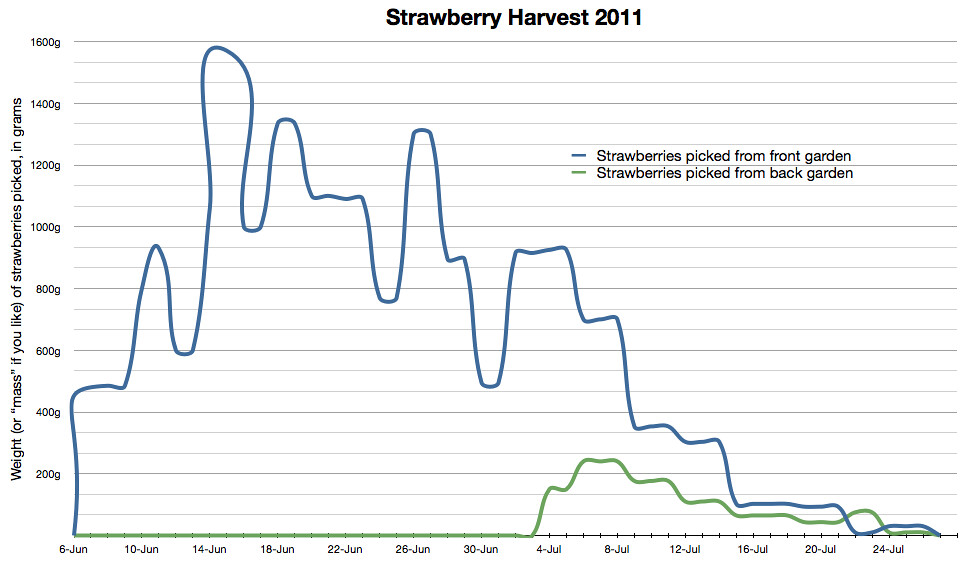 I made last year’s chart in Google spreadsheets, but this time I used Numbers on my Mac. I don’t know how to use it properly but it does the trick, sort of. It’s not meant to be precise, hence my use of curved lines and and crappy scales ((Furthermore, I’ve adjusted my data so that if I’ve skipped a day of picking, I share the pickings of the subsequent day between the two days, rather than having loads of zeroes all over the place.)).

Look at the data. Absorb the data. Feel the data. Yeah, go on. Touch it.

You can see that I start picking (seriously, at least, and recording it) on 6th June in the front garden, and the yield after that increases dramatically, with the highest output being around the middle of the month (by which point last year the harvest was only just starting!). The back garden’s output was insignificant in comparison and pretty poor.

Through the rest of June, I picked a steady 100 grams every day; this was the front garden in maximum production mode. Next year I would expect this portion of the graph to be level at at least 200 grams, as the plants will be much better established. 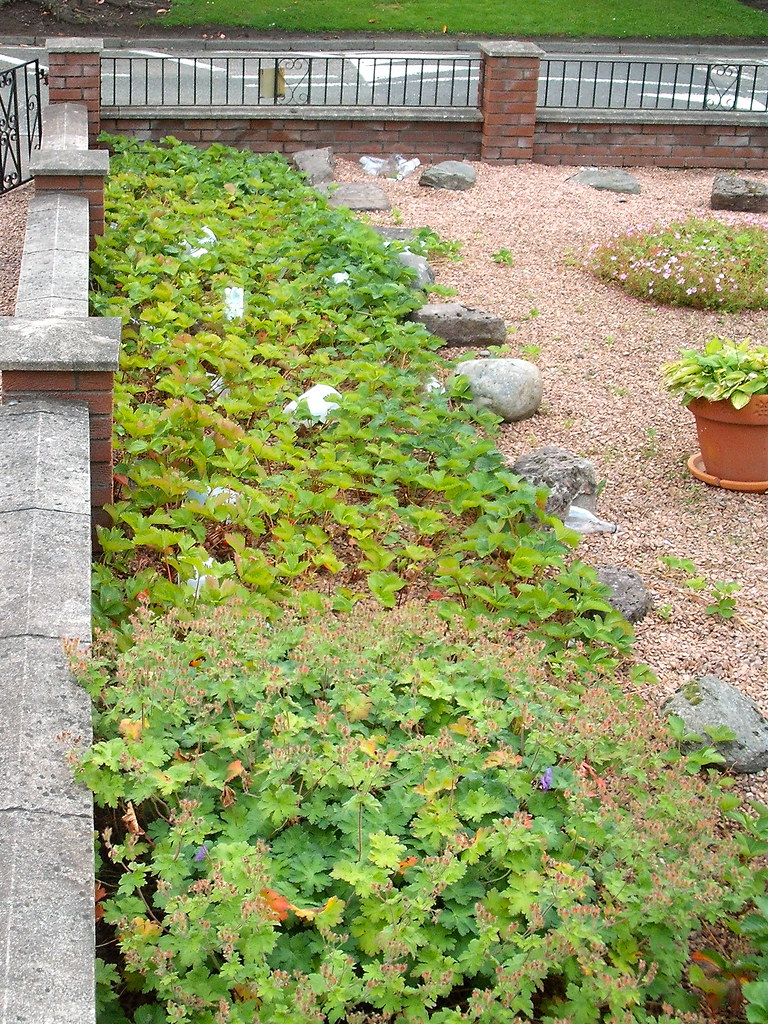 Not even slightly accurate. My plants were producing several punnets worth of strawberries every day. Several. Heck, I already miss it, but the amount of sugar that I ate mustn’t have been healthy for me. Strawberries are very sweet.

Here are some of those big juicy delicious end-of-June ones that I’m on about. They’re SO good: 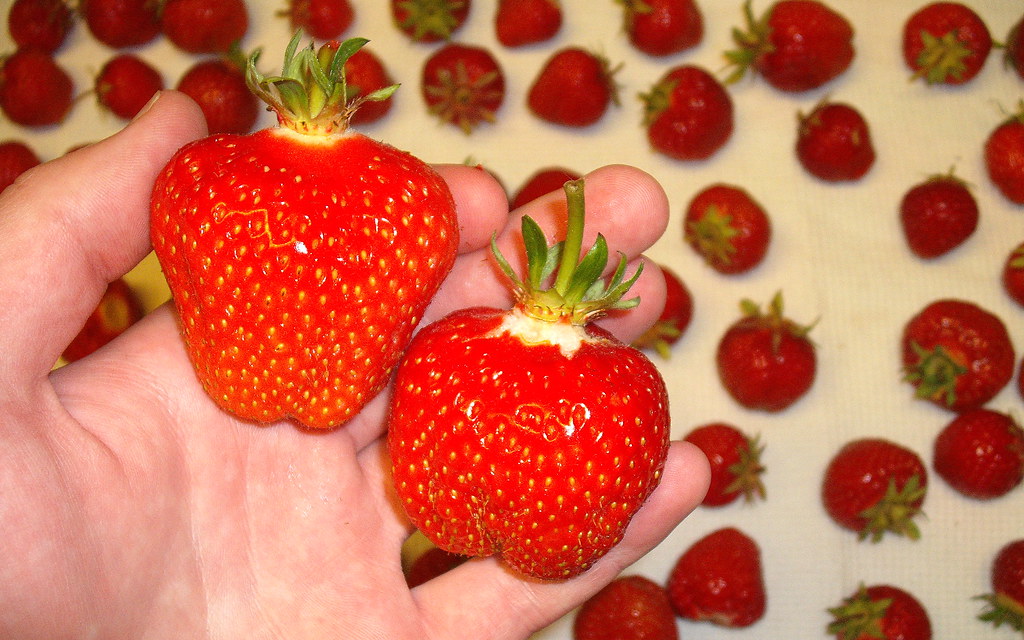 That’s about all that I have to say. Before I go, though, I’ll just lay out some of the problems I encountered: 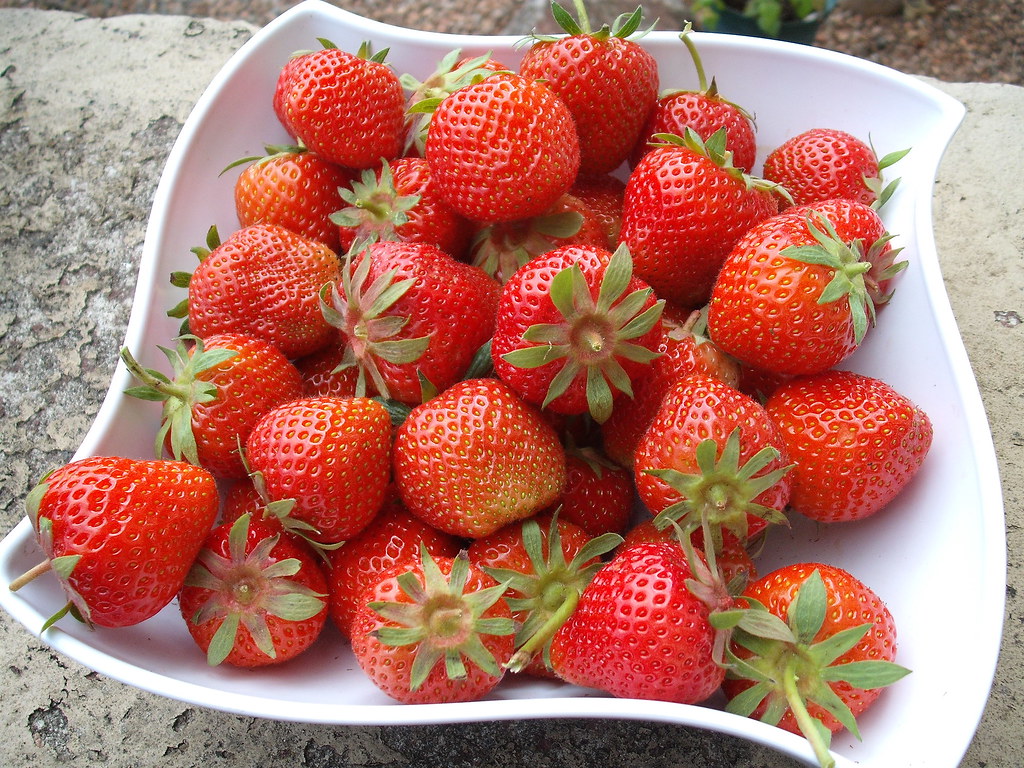 I’ve not mentioned the back garden much. It was pathetic. The plants there are old, producing smallish, hard, deformed berries. The plants are mostly leaf and almost no berry. What’s more, they get much less sunlight than the front, and they’ve slowly become overrun by slugs. And even earwigs. Eww.

So: I’m getting rid of of them. In the next few weeks I’ll dig them up and put them in the brown-lidded bin. I have enough plants in the front garden. The back is just a waste of time, now.

A positive thing that I’ve learnt: you know you’re going to eat a delicious strawberry when you hold it up and it shines. Shiny ones are the best, and you rarely see that in supermarkets. They have to be very fresh. I think the shininess comes from the berry being laden with water/juice, which stretches the skin from the inside. Beautiful.

Another thing that I’ve learnt: contrary to previous reports, I don’t prefer refrigerated strawberries. My very favourite berries are those large juicy ones at the height of summer, picked and eaten within seconds. Unwashed, warm from the sunlight, juicy and amazing. And shiny. 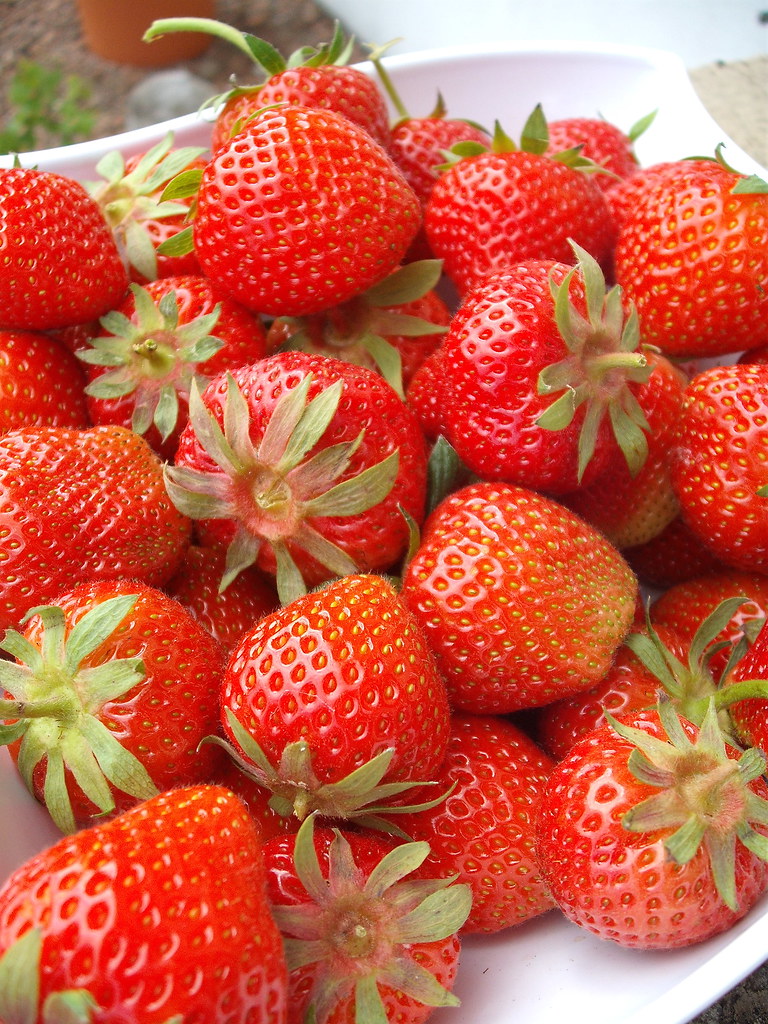 This year, when the berries finished, the runners once again went mad: 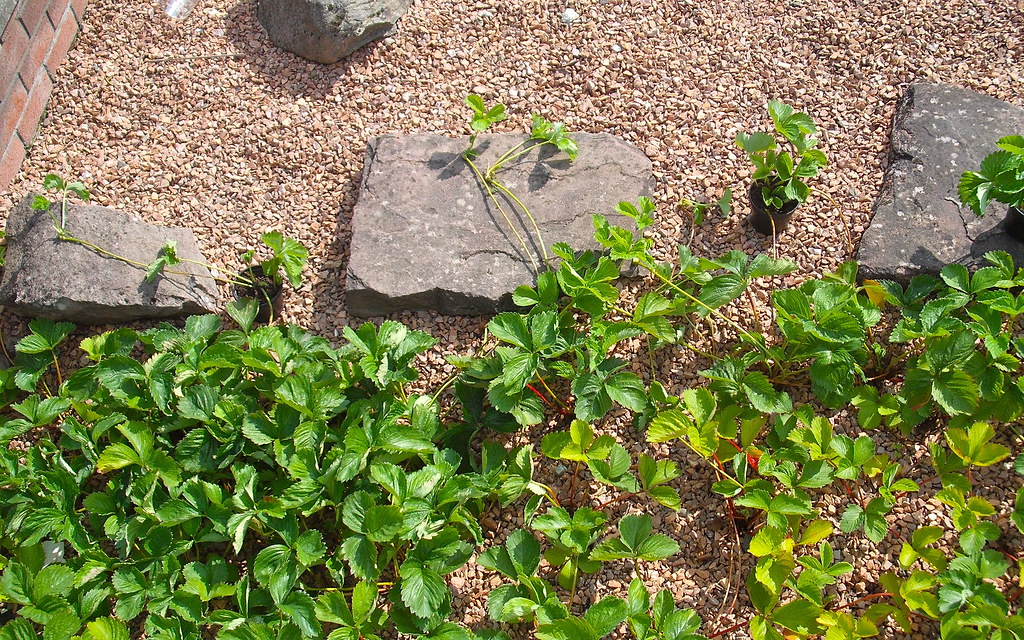 What have I done with all the runners this year? Most I’ve destroyed, and with some of the others I’ll replant the worse-performing plants from this year. But the rest? I’m sending them down south. I spent some time last week and most of Monday digging a strawberry patch in my Dad’s garden. Diversification, baby. Here it is: 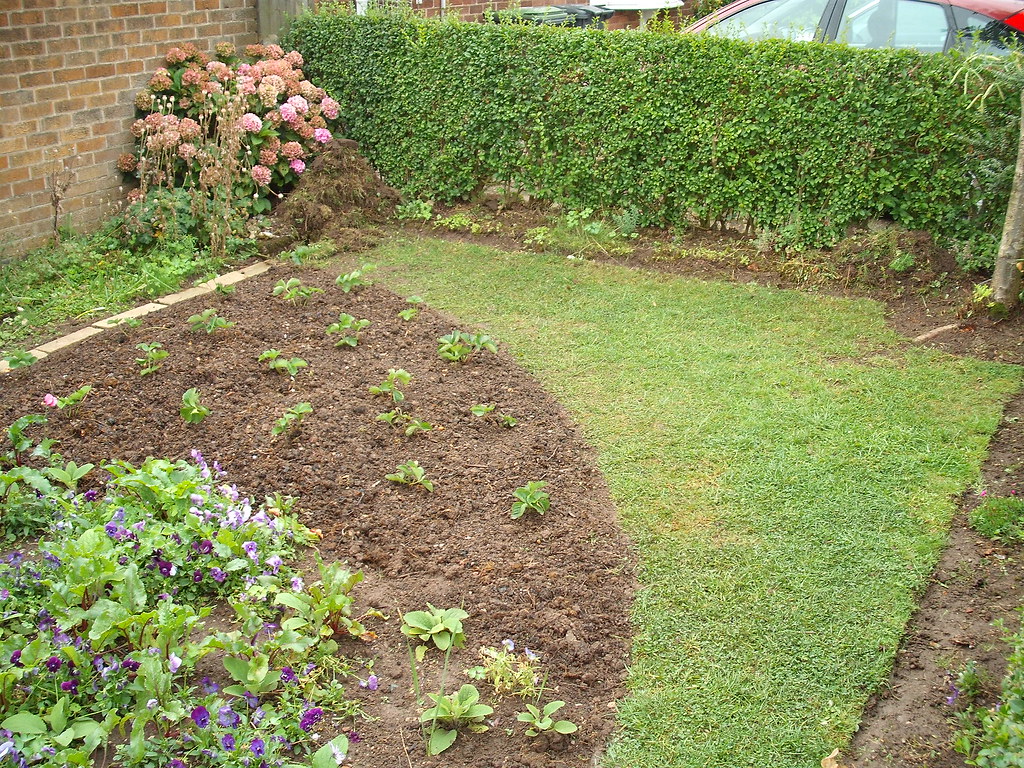 I’m still sore from digging it. Roll on next June.