Perhaps my favourite improvements ever added to iOS were those made to the music player app in iOS 3.0: 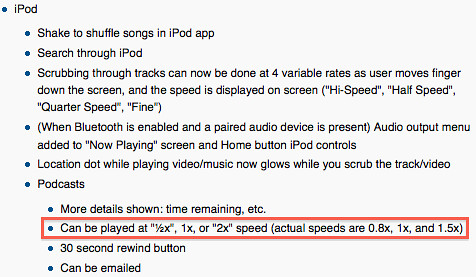 Search was a nice addition, variable-rate scrubbing very useful, and I use the 30-second rewind button all the time. But I find particularly the playback speed button the most indispensable. It has changed the way I listen to podcasts.

Since the release of iOS 3.0 in 2009, I have listened to most of my podcasts on the “2x” speed setting, with only one or two exceptions.

On a walk along West Sands back in December, I brought this up with my good friend Adam Kesby. He was horrified ((Again, I may well be telling lies.)). How could I do such a thing? Podcasts are supposed to be consumed the way that they are published, the way the creators intended. How can you even take it all in that fast? Surely you’re losing something?

I would have called him an arty snob if it hadn’t been for our clearly different perspectives.

Let me make a couple of things clear with this iOS technology:

Today, on another walk ((Guess where to?)), this issue was again brought to my mind when I was listening to the third episode ((They brought the issue of listening to stuff on 2x on the second episode, but they talked about it at slightly greater length in this one.)) of Dan Benjamin and Merlin Mann‘s new podcast, “Back to Work” ((I’ve still not decided if I like the show or not – it’s just that, in general, I like listening to anything with Merlin in it. Give it a try, but it might not be for you. It might not be for me.)). They’re not keen on the 2x practice, though their reasons are not very explicit. Dan is horrified that people might be listening to his podcasts sped up. “Shame on you”, he says to those who do it.

But… why? What’s so wrong about speeding up your podcasts a little? 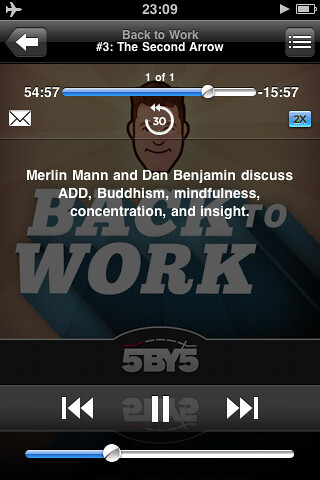 We read books at our own pace. We look at paintings for as long or short as we like. Everyone’s happy with this. I also understand that if an art form allows a property to be controlled, then that property is considered to be part of the work, and that should be respected to appreciate the creator’s intent.

Yet podcasts – at least the ones that I listen to – are not art, and there is no conscious design in the pace of the speaking. The exception is when the audio is a performance, like fiction or comedy, which is why I listen to You Look Nice Today at the speed it is recorded. I always listen to audiobooks at their original speed, too.

Aside from a moral objection to increasing the speed of someone else’s work, what is wrong with listening to podcasts faster than they were recorded? Most interview, round-table and talk-show type podcasts are perfect for speeding up. They are unscripted, meaning that the speakers are thinking up words as they go along. Their speech is therefore quite slow, filled with “umms” and “ahhs”, and the result is that increasing the speed doesn’t decrease comprehension one bit ((If things start to get more technical, all you need to do is press the button twice and you’re back to normal.)).

As an aside: I listen to audiobooks at the unaltered speed, so sometimes the speed is still set to 1x when come to I listen to a podcast. I almost always notice straight away ((I even wonder if the speed has been set to 1/2x, it sounds that slow.)). It’s got to the point that I find it very uncomfortable listening to the natural podcast voices of certain people, like Leo Laporte, Dan Benjamin and Steve Gibson ((I generally won’t listen to a live podcast for this reason too: as well as knowing I can listen to it later in two thirds of the time, I will actually find the experience irritating.)). People can take so long to say almost nothing.

People can consume far more quickly than they can create: we can read faster than we can write, and we can listen much faster than we can speak. Technology allows us to increase the speaking of others towards the capabilities of our hearing, without losing anything.

The great benefit of listening to podcasts sped up, of course, is that it lets you listen to even more stuff! Your time is precious, and I highly recommend saving some by speeding up your chatty podcasts.

P.S. This was going to be a short post.