For some reason I hadn’t heard of The History Boys until just before I watched it. George recommended it to me. He’s keen on recommendations, but… somewhat lacking in persuasion. My focus has many worthy demands, and telling me to “watch this” doesn’t always attract me. Telling me twice, however, and including the word “indeed”, seemingly does.

It was the film that I watched – the play is not currently being performed ((Although after seeing the film I’d love to see the stage version.)). Strangely, the film was on iPlayer – I didn’t know that the BBC put films online, but it was welcome surprise ((I shall shortly be writing about copyright, piracy etc. (though only if I can collect my thoughts sufficiently coherently).)). 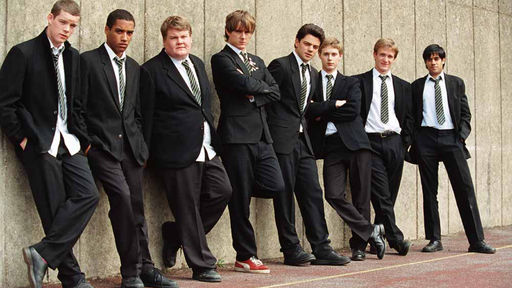 In short, I’ll describe it as a delight ((Rotten Tomatoes rates it decently, which I’d agree with.)). Yes, it’s a story of some boys trying to get into Oxford University, but it’s so much more. Although I have a vague relation in that respect, it’s about knowledge and learning and thought – exactly what endears The Secret History to me so much. And it’s so charmingly done and well acted that it could have been about anything and I’d still have loved it ((It was strange as well, knowing that all of the actors were about 30, playing characters of about 18. It was also funny. I liked the French bits too.)).

I shall endeavour to find out more about Alan Bennet and his work.