If I had to be a fanboy of just one thing, I would choose Metal Gear Solid. 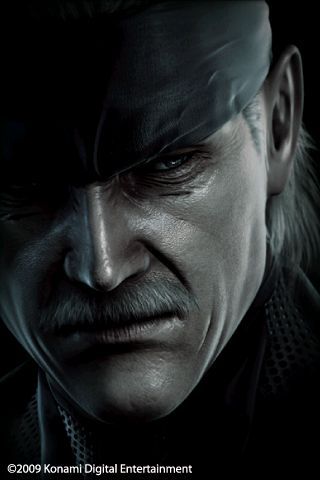 My reasons may not be entirely logical or particularly easy to explain, but I think Metal Gear Solid is the best game I have ever played ((That’s my worst use of hyperbole… (Jeremy Clarkson voice) in the world.)). There is some worthy competition – I love Half-Life 2, it’s an excellent game with a compelling storyline, engaging gameplay and it’s finished extremely well with great technology; I love Super Mario Brothers – but for me, Metal Gear Solid superior to all other.

If you’ve never played MGS before, I urge you: play the fucking game. Really. When I think of my life, I consider it to be in two parts: the time before I first played Metal Gear Solid, and the time since. Although I am exaggerating, when I first played MGS, I was awed by it and I immediately saw that it was a special game.

MGS has everything that all other good games have: it’s fun, it’s challenging, it’s got good graphics (or at least it did for the time), and it’s got a good storyline. But when I play MGS, I feel as if I am in the game, and that I am learning something. It is so atmospheric and cinematic – the designers and musicians behind the game are brilliant. Can you think of anything spookier than fighting again soldiers in green overalls and gas masks amongst an underground Alaskan warehouse filled with nuclear weapons (with gas flooding the room if you are spotted) whilst creepy music plays? I can’t.

The series is famous for pioneering the stealth game genre, for its lengthy cinematic cut scenes, intricate storylines and its exploration of the nature of politics, warfare, censorship, genetic engineering, artificial intelligence, loyalty, reality, subjective vs. universal truths and other philosophical themes.

Much like Linkin Park’s lyrics, MGS has a very deep story ((In both senses of the word – there are parts of the game which I either missed or still don’t understand, and every time I replay the game I can appreciate its excellence even more.)). That makes it sound like a very serious game, and it does deal with serious issues, but at the same time it doesn’t take itself too seriously. Have you ever heard the words “Snake? Snake? Snaaaaake!”? You can even pick up cardboard boxes which you can hide in – not that they do any good mind you ((I just read that actually the cardboard boxes do have a use. Nice.)) – and you can escape from a cell with the help of tomato ketchup.

I’m the sort of guy who likes philosophical issues, but I’d much rather consider them by actively doing something than just reading a book. Playing a game gives context to the ideas that you’re trying to think about. Soon into the game, you meet a girl called Meryl, and you quickly learn that she has never killed a man, let alone shot one. You fight a guy called Psycho Mantis who, when you have beaten him, is revealed to be a sad man, his feelings numbed by war and his childhood. And you fight a ninja who was left to die on a battlefield, picking fights and killing people just to feel alive again. In other games, war and death and killing is not questioned, its effects much less examined, but in MGS these issues are explored.

For some reason, I believe the setting of MGS – a world with nuclear weapons and advanced military technology along with an oblivious public – allows the game to deal with philosophical issues in a way that World War 2 games, despite the richness of their setting’s history, can never seem to. The end cut-scene of the game, before the credits, captures the essence of the whole game perfectly. Someone speaks as sad music mourns the loss of hundreds of lives, including the love of Otacon’s life. Although the game deals so much with death, the game is really about life and the choices we make ((For context: the creation of a type of genetically altered solider is part of the story.)):

“Each person is born with their fate written into their own genetic code. It’s unchangeable, immutable. But that’s not all there is to life, I finally realised that.”

“You mustn’t allow yourself to be chained to fate, to be ruled by your genes. Humans can choose the type of life they want to live. The important thing is that you choose life… and then live!”

Last week, I bought and played Metal Gear Solid Touch ((I had initially downloaded the demo version when the game cost £4.99. When I looked last week, it was half price. For whatever reason – perhaps I was busy – I didn’t buy the game at that point, but I looked the next day and it was £1.79. Nice.)). It’s not a significant game, merely a retelling of MGS4 (which I have not actually played due to lack of a PS3), but it was well made and made about as much use as it could out of the same screen and limitations of a touch screen.

That also prompted me this afternoon to find my copy of MGS2 and play it, which I did for about an hour. It’s a really good game. Unfortunately my copy of MGS was destroyed by my PS2 recently, which means I can’t play it. I’ll have to buy a copy – and I’ll be happy to.

And a note – I realise that this post will sound pretentious and, to be honest, I’m not happy with the way it sounds, but writing this has taken about 3 hours ((I also realise that when saying MGS sometimes I am referring to Metal Gear Solid (ie MGS1) whilst other times I am referring to all the MGS games. I hope you can work it out.)). Only about 1 hour of that was typing – the rest of the time either I was contemplating the game and war and death, or I was reading up about it on various websites in order to get my facts right and to see what other people think of the game. I recommend writing about something if you want to learn about a topic and to collect your thoughts on it.