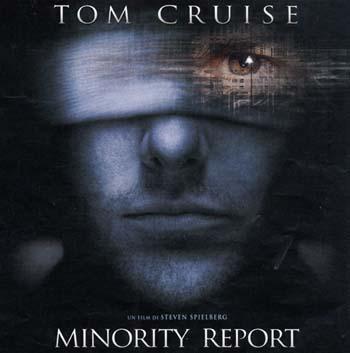 Well, last night, I was watching CSI New York (as you do on a Saturday night), and it came to its – as always – rather obvious conclusion around 10:45. Due to follow was an episode of Law and Order – just the basic series, but as I watched the credits roll for CSI I was informed to my dismay that instead Channel 5 would be playing “catch-up” with Grey’s Anatomy. Grey’s Anatomy, if you ask me, is a show that the producers should be ashamed of making. It is pathetically bad, I just don’t get the point of yet another medical drama involving very messy love lives. Not worth the time.

Anyway, with the disappointment of Law and Order still in my system, I sat on my settee in shock and flicked to BBC 1. Or 2. I can’t remember. I was greeted with the opening sequence to Minority Report (which is a film by the way), so I looked at the clock, and decided that for once, I was actually going to watch a film, the whole way through, from beginning to end. And, being the BBC, I would not be interrupted every 2 minutes with an advert, because I’ve already paid for the privilege of watching this film through the TV licence.

As you might have gathered from my recent postings, I am not really into writing positively at the moment. And this post about Minority Report isn’t about to buck the trend. Basically, the film goes like this: Tom Cruise uses something to see into the future to see murders about to happen, then goes and catches the person about to do the murder and arrests them. But then, Tom Cruise himself is set up and he is the person who is about to commit the murder. If you’ve not seen the film; don’t watch it.

The absolutely pathetic story of the film aside (there are serious issues about life imprisonment for a crime which never got the chance of happening, and might never have), I have a lot of problems with Sci-Fi. Some people will strongly disagree, but I think that Science Fiction is one of the worst possible genres for writing and making films, and should be left to the mentally unstable and those under the age of 7. Steven Spielberg, it seems, must therefore be of the former, as he is definitely older than 7 years old. Here’s some of my issues:

Minority report is set in the year 2054. Now, think that this film was made in 2002, giving just 52 years for the changes shown in the film to take place. Everything – and I mean everything – has changed. There are no cars, just flying things which, of course, are designed with loads of curves and lots of non functional crap just hanging around. Then there’s the housing, most of which is high rise flats with everyone crammed into pathetically dismal rooms much worse than they are today. Also, there’s basically the whole rework of all our cities to remove roads, remove any open space, and to just fuck everything up. In 50 years. Think how many 50 year old buildings you see every day. Do people seriously think that everything will have changed so dramatically by this time? Also, the population of rich countries is declining, so why cram everyone else in, and as you’ll see later, have HUGE other buildings. Stupid.

The architecture too is seriously seriously awful. I’m talking about the precrime lab. Apart from the 3 seers, who have their own almost chamber to themselves, with ceilings 30 metres highs and a pool of water much too big for them (of course in real life if this story were ever to happen, they’d just be locked up in a small sideroom), there’s the main building which is a vast waste of space. Bastards. Will the legacy of future generations be the wastage of space into huge redundant areas of fresh air be real? Of course not, it’s not even a good idea. Imagine going into your local police station and instead seeing that really famous cathedral, what’s it called. Ah I can’t remember. But you know what I mean, something like 100m x 100m x 100m which at the centre has a solitary reception desk at the middle. CSI also does a bit of that.

Tom Cruise’s computer itself is a bit a bullshit. He stands in this circles and moves his hands around stupidly, controlling this huge screen around him. Firstly, god it’s big. Second, surely there’s a better way of controlling something than through a lot of physical exercise. If I was on my computer and wanted to slow something down, I wouldn’t want to do a funny jive with my hands, no, I’d just want to click slow. Thirdly, there’s the twatty portable media things, which not only are many times larger than our flash memory today, but also a lot more damageable. And finally, there’s the completely absurd user interface. Yes, Sci-Fi fans, the future is going to be full of computer that make noise (like Defcon) every time a key is pressed or text appears on the screen, everything is going to be black, all videos will be flickery, and of course, there’s going to be a lot of unneeded stuff going on which is only going to serve to reduce your productivity.

I really don’t think I’m making sense here, it’s a Sunday evening and I can’t be arsed making sense, but I just hate Sci-Fi movies that are so shit. That’s all of them. Yes, they’re fiction, but why choose a fiction which is worse than what we currently have? Come on. The world won’t really be very much changed (not visually anyway) in 50 years.