Me & My Life, Personal, Photography

The Last Week of May

On 25th May last year, I woke, ate, dressed, and walked to West Sands to watch the sunrise. At 3:30am. It was during one of the strangest weeks I’ve ever had. 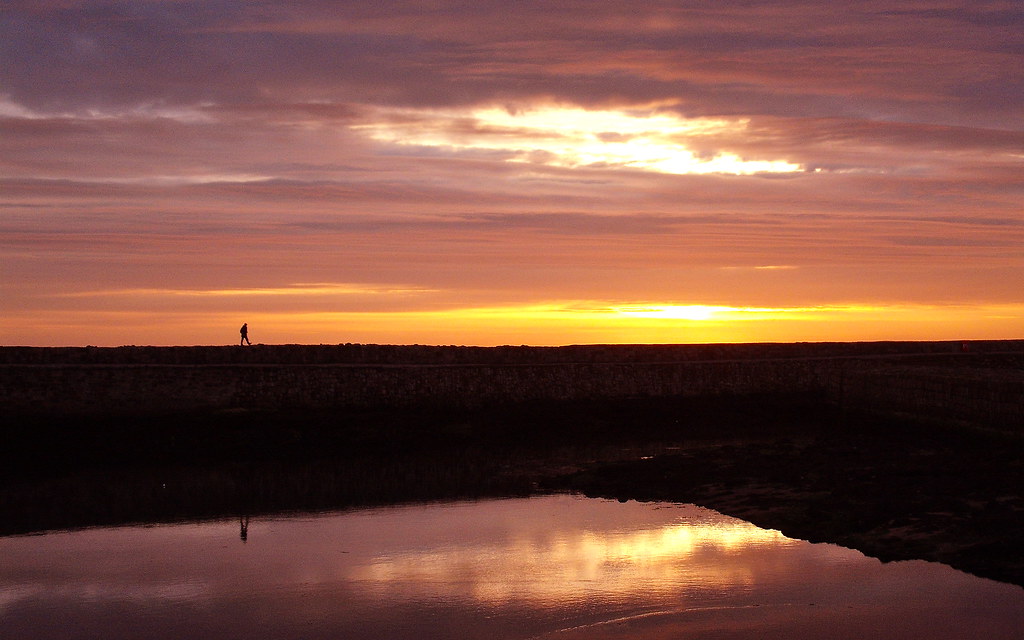 My final exam of first year (Great Ideas 2) was on Monday, the 23rd. It didn’t go very well, but I was so relieved to be finished. That was in the afternoon, and I spent the evening in the common room with Mike, watching films and drinking gin and tonic. I got drunk.

I don’t remember what I did on Tuesday, but by the evening I realised that I wasn’t interested in whatever events were on that night. I got the seed of an idea for an early Wednesday start, and fell asleep at around 10 with my alarm set for 3:30am. I’ve never set my alarm that early before, and I don’t think I’ll ever do it again. 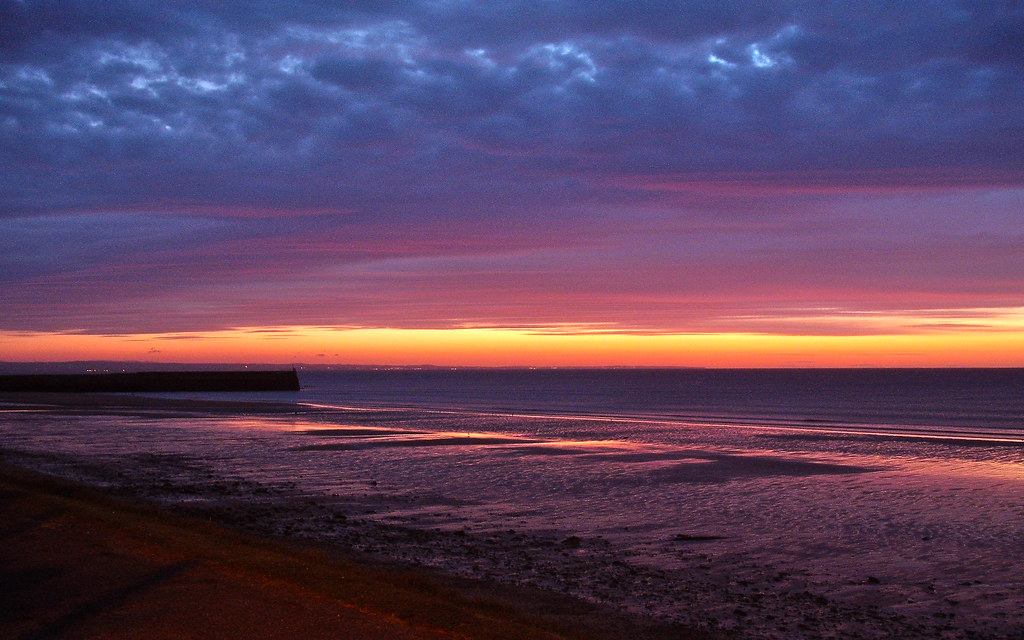 Sunrise for Wednesday was at 4:40am. By waking up so early, I gave myself plenty of time to walk and see the best of the sunrise. Some of the most vivid colours and lights in a sunrise occur a while before the Sun actually breaks the horizon, which is roughly the quoted sunrise time ((Precisely, sunrise is given as the time when the centre of the Sun moves above the horizon. The fact that the Sun is not a point source of light causes many odd phenomena in our daily lives.)). By midsummer, the sun was rising as early as 04:21am.

It’s really weird walking around that early – before 4am – and being able to see properly, in full colour. I often get to walk around a deserted place at night when it’s dark, but when it’s light – even just twilight – the quietness feels different. Really serene. I love feeling serene. 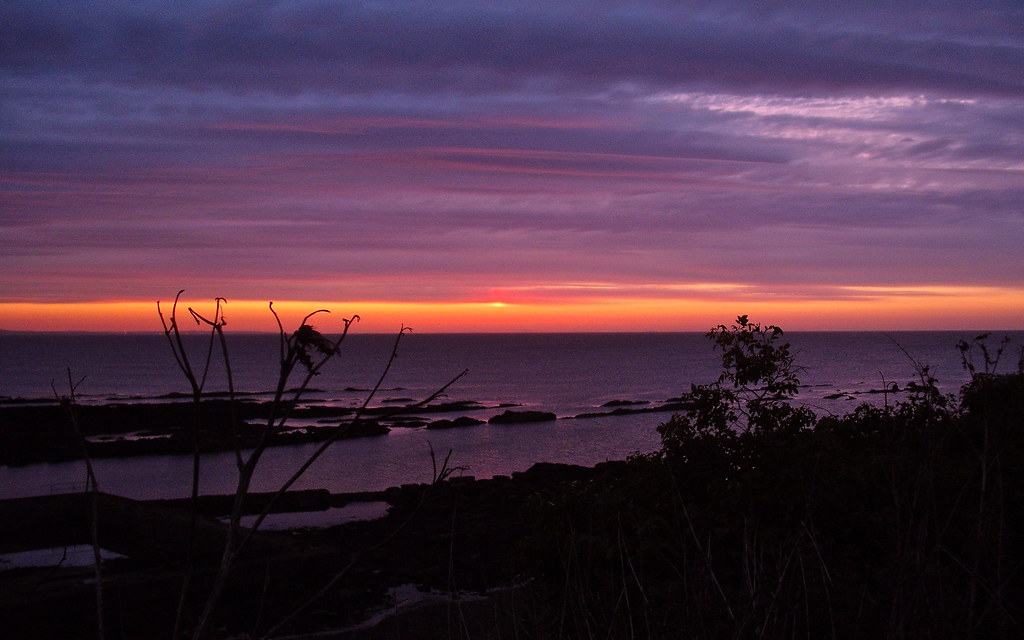 Why did I want to go to West Sands to watch the sunrise? Because it is one of my favourite places during the world – especially at low tide. And the tide was low. Then, it’s an amazing expanse of almost-level sand by the (usually) gentle sea. Perfect to compliment and reflect the colours of the rising Sun. 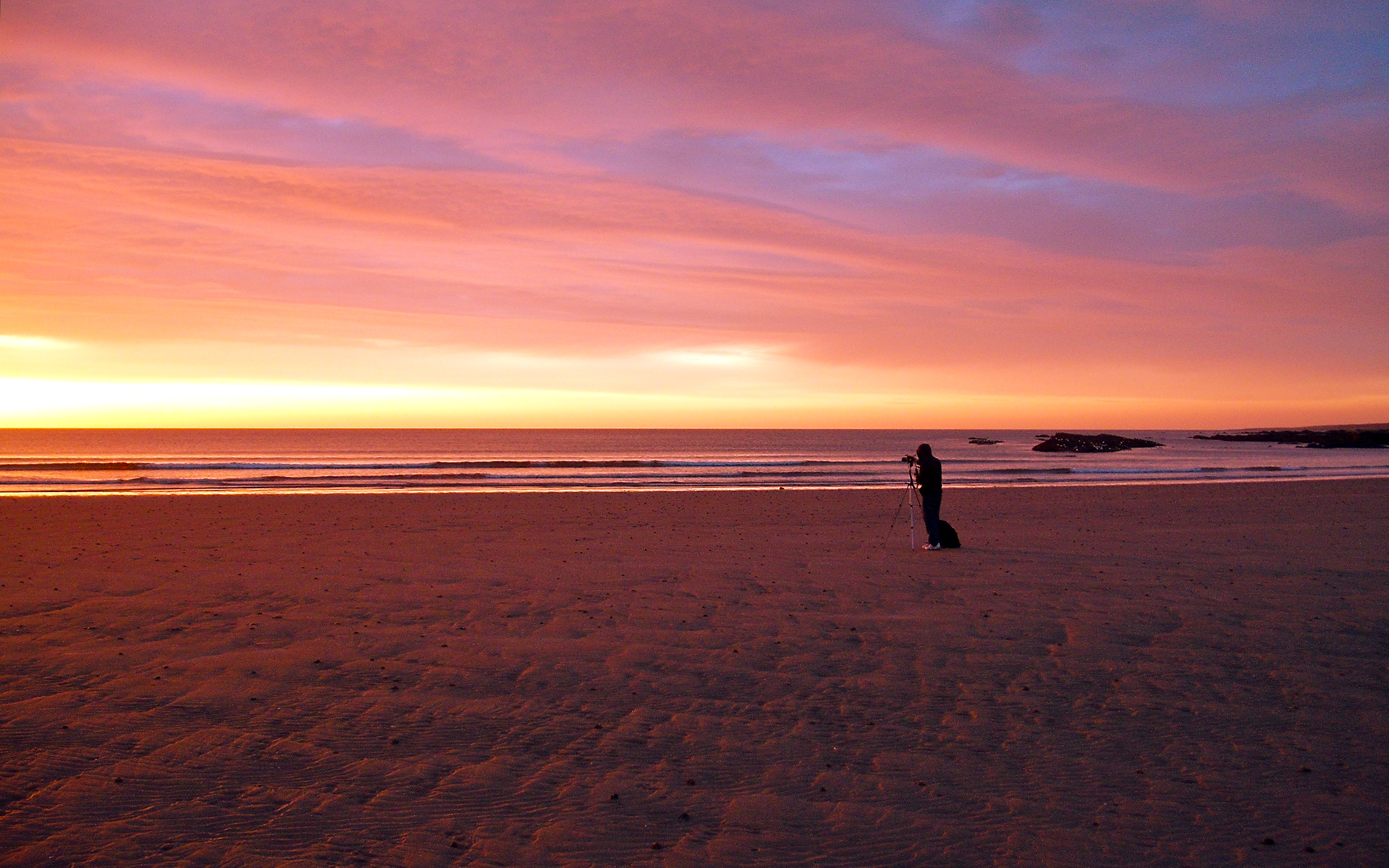 Are you familiar with Eno’s Apollo: Atmospheres and Soundtracks album? I am. Throughout the morning I was listening to it, and it was the perfect accompaniment. 3 of my favourite tracks from it are An Ending (Ascent), Drift and Weightless.

Here are YouTube links to the tracks: An Ending, Drift, Weightless. Play one (or all) of them whilst you read the rest of this post, if you want; you’ll probably recognise them from films or TV, as they have been reused extensively.

With my headphones on, music playing, I stood part-way down West Sands for half and hour, relaxed, and enjoyed the show (don’t worry there’s more story after the photos): 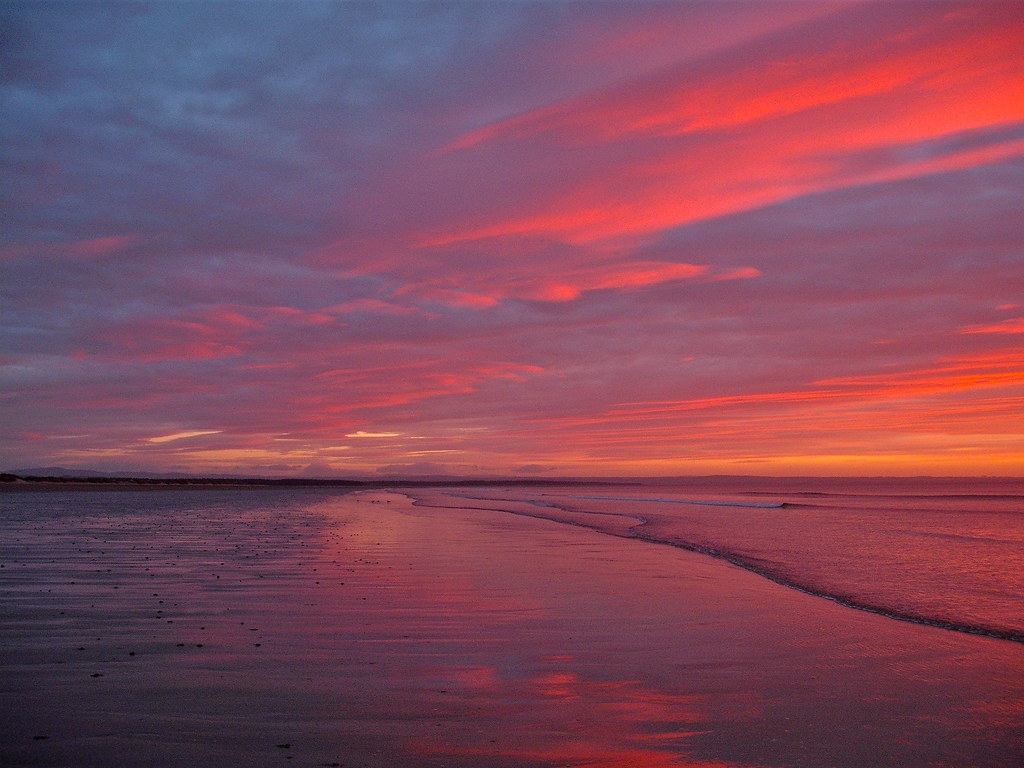 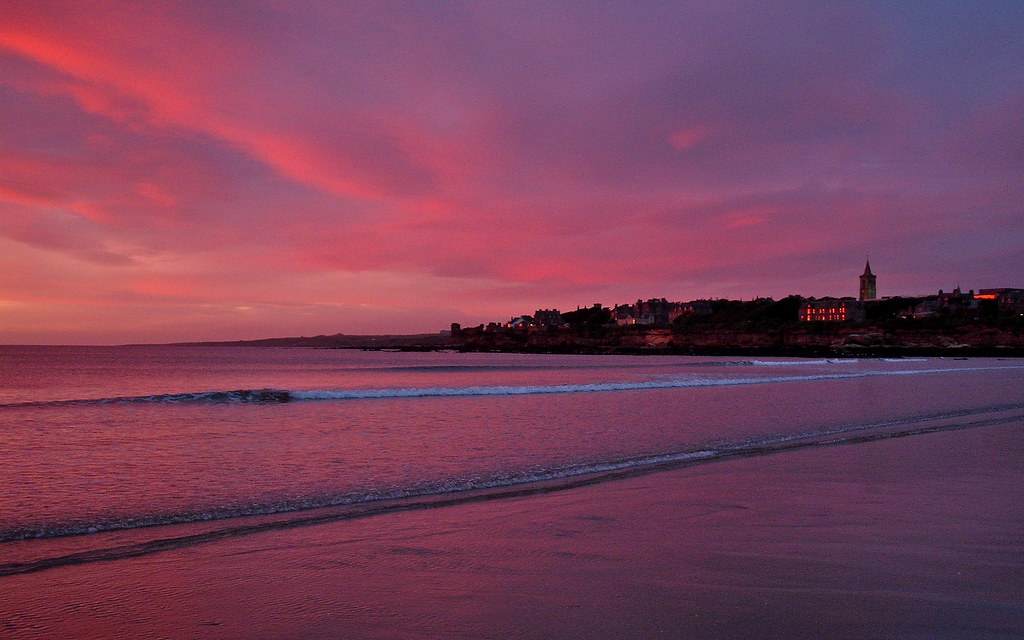 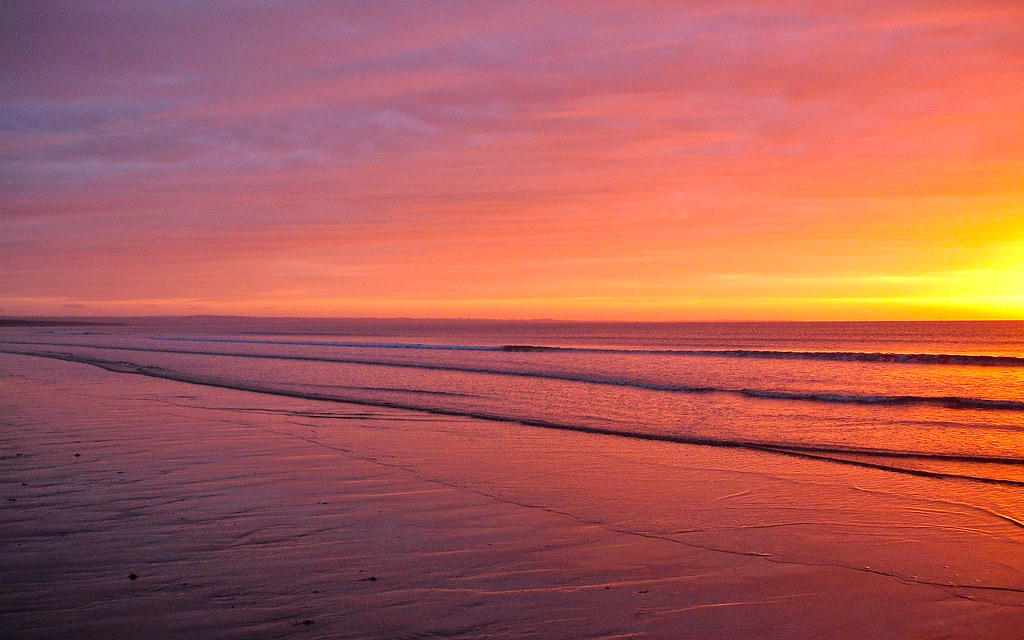 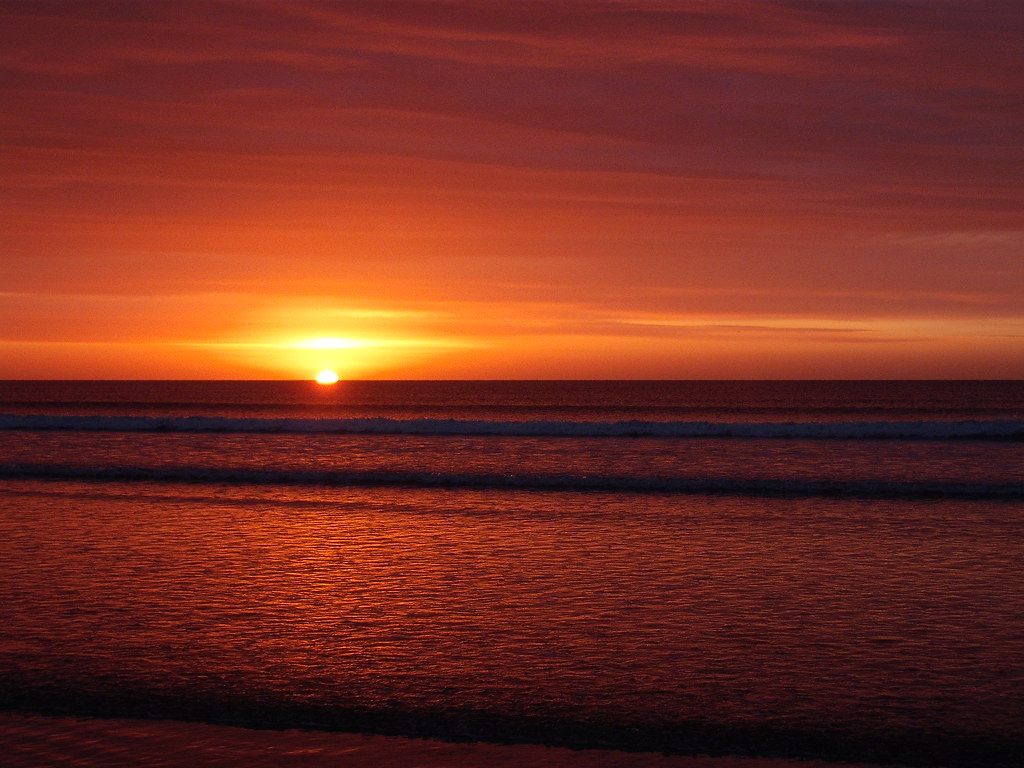 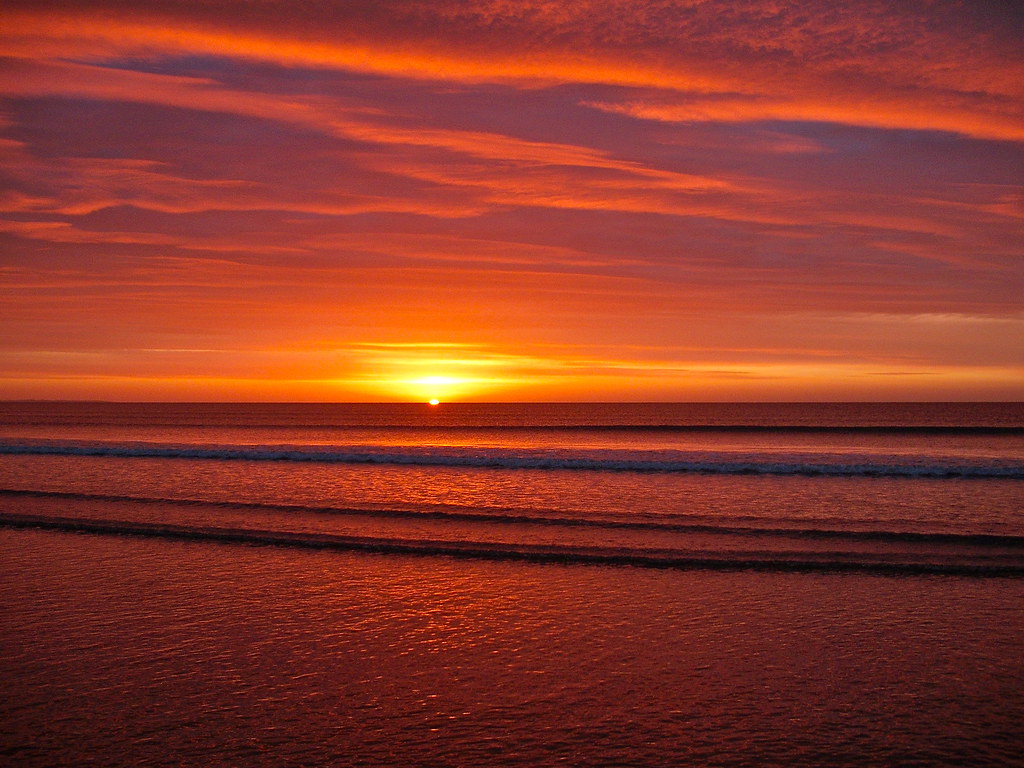 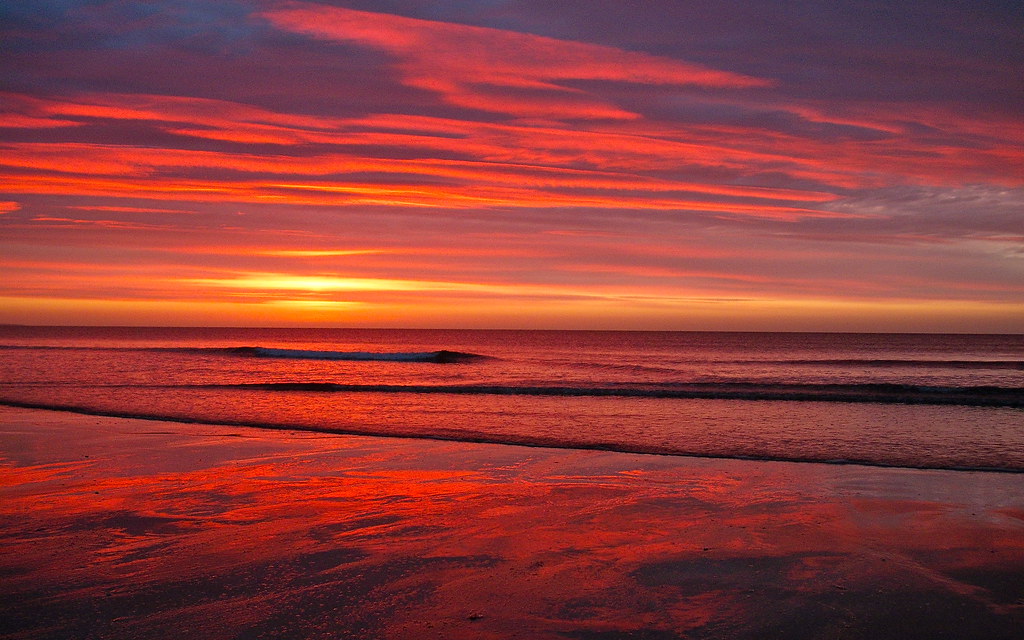 Once I’d had enough and got too cold standing around, I headed back to East Sands where I put the rest of my crazy plan into action. In my bag I had packed a towel, and underneath my clothes I was wearing swimshorts. I got in position, and looked around to see if I was alone. It was 5am, but surprisingly there were other people up and about. On the bench by the coastguard station 3 people were sitting, looking out to sea. Being sober and self conscious, I decided that I would not skinny dip. I stripped down to my shorts, flopped into the water, and swam for about 20 seconds until all feeling had left my extremities. It was the coldest thing I have ever done, and as quickly as I could I threw a towel round me and headed the 2 minute walk back to my house.

On my way back to warmth and safety, I bumped into the people who had been on the bench: they were my friends Nigel, Bella, and a mystery guy who seemed very much into Bella. Bastards, ruining my chance at a skinny dip! I’ll try again sometime, probably with alcohol for courage.

I showered to get rid of the salt and sand and to warm me up, and knowing me I probably ate again. But despite my best efforts, and even though it was still very early in the morning and I was tired, I couldn’t fall back to sleep. This fucked me up badly for the rest of the week.

I can’t remember how I spent the rest of Wednesday. Despite there being a beautiful sunrise, the Sun quickly headed into cloud where it remained all day. I probably spent it in my room, reading and packing up my belongings for the summer.

On Thursday, after lunch, I remembered that the BBC would be in St Andrews filming an episode of the BBC’s Antiques Roadshow. Contrary to the belief of many, it’s not always an awful programme. With the vague hope of seeing something interesting, and the more realistic hope of appearing on television, my future housemate (Adam) and I set off to the main University quad, where the show was being filmed.

We arrived at about 4:30pm, and Fiona Bruce was just leaving. She had filmed all of her spots, and most of the visitors had already had their artifacts valued. But the day wasn’t over: after looking at everything, the experts then decide which pieces to film properly, to make it into the final show.

Adam and I stuck around for the filming of the first few of these, hoping to see something interesting and to appear on TV. But as the evening progressed and the weather became duller and colder, most of the visitors left, leaving a very small audience to provide a convincing background. And so, we were roped by the producers into staying until the very end, watching about 8 pieces being filmed until 6 or 7pm.

Let me just say that basically everything you see on Antiques Roadshow is staged – the original valuations most likely weren’t filmed, and even if they were, they are run through several times more before a good enough take has been recorded. TELEVISION IS LIES. Remember that.

The episode at St Andrews finally aired at the end of February, 9 months later. There is another part to it (which will most likely feature me, too) and it will air during the next series. That’ll probably be next year. Here of some of the screenshots.

In this one you can see me at the back, grinning: 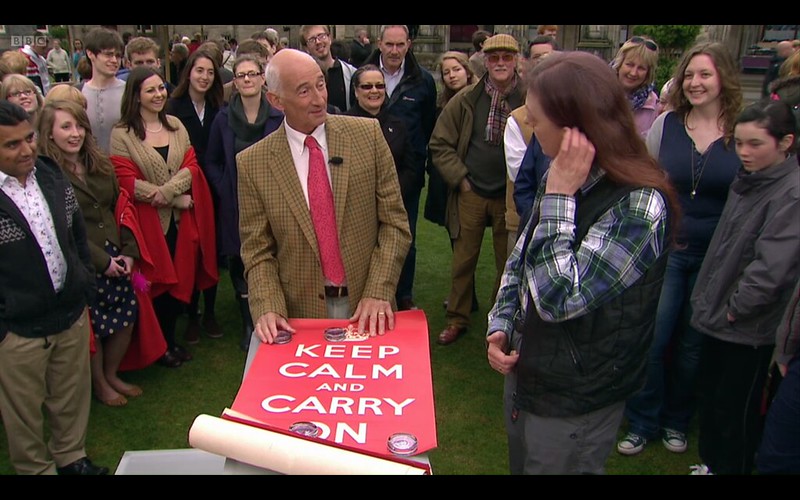 A little smirk on my face this time: 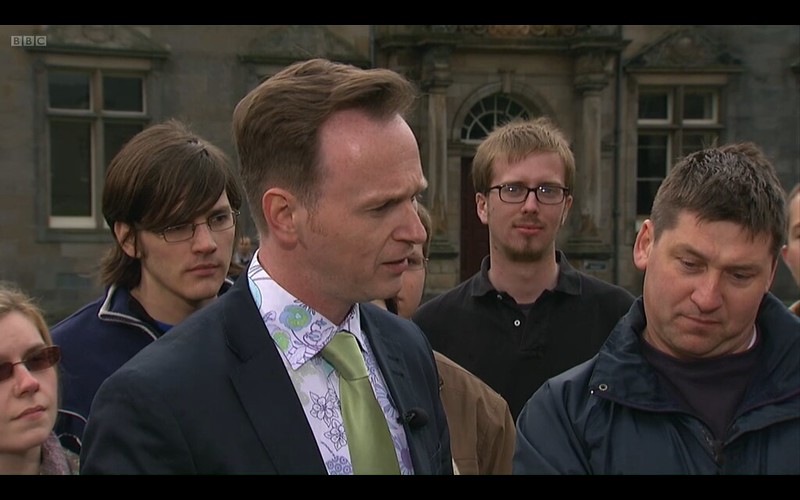 And again, a smile:

Afterwards, we headed straight back to Albany Park. The Albany end of year party was being held that evening in the Vic. The theme was the 80s. Lacking sleep and having just spent ages standing in the cold for television, I was not up for it. At all. However, I visited the common room where the Warden and her assistants had put on a ‘drinks and nibbles’ event, and after 30 minutes of wine, chatting with Martyna, I left with the rest of the wine bottle I’d been drinking (and which I promptly finished) and I was definitely in a partying mood.

In my stupidest mistake ever, I decided that there was no time for food. To this day, that was the only occasion on which lunch was ever my final food of the day. Yet even forgoing food, I still managed to arrive at the party late, missing much of the fun. But at least I was drunk, and ready to party.

And it was a really fun party… until about 10pm. Now, looking back, I think about all the ways that could have happened differently, all of the choices that I might have made differently, to stop me from going to that party. But I went, and I met – for the first proper time, at least – a girl called Emily.

We started talking, and from then on neither of us cared about the party. We spent the next couple of hours chatting, drunkenly getting to know each other right there in the middle of the party.

Now she’s my girlfriend, and we’ve been together for nearly 9 months. Once again, I’ve had a year which was completely unlike any of my previous years. I’m happier than I’ve ever been.

May has long been my favourite month. I think it’s going to stay that way.

UPDATE: After 2 years together, Emily and I split up towards the end of 2013.